It remains to be seen whether the discharge could have contained other contaminants.

PORTAGE, Ind. (AP) — U.S. Steel says a northwestern Indiana plant's discharge of elevated levels of iron were the cause of an orange plume that entered a Lake Michigan tributary, prompting the closure of several nearby beaches and a water treatment facility.

Company spokeswoman Amanda Malkowski said in a statement late Monday that an analysis of the discharge from the U.S. Steel Midwest plant in Portage revealed “elevated concentrations of iron causing the discoloration" in the the Burns Waterway.

The company did not indicate what concentrations of iron were detected in the discharge, and it was not immediately clear whether the release posed any threat to public health, the environment or wildlife.

U.S. Steel idled the plant about 30 miles (48 kilometers) east of Chicago as a precaution after it said the wastewater treatment facility experienced “an upset condition” that sent the rusty colored plume into the waterway Sunday.

The U.S. Environmental Protection Agency said Tuesday that it was awaiting results from its own samples of the plant's discharge and would provide an update once those results are analyzed.

The EPA did not respond to a question from The Associated Press about what impact elevated iron levels could pose to humans, animals or the environment.

Gabriel Filippelli, a professor or earth sciences at Indiana University-Purdue University Indianapolis, said the test results released by U.S. Steel were vague but that, “in general, iron itself is just kind of a nuisance rather than a contaminant that requires a significant amount of intervention."

With testing still underway, however, Filippelli said it remained to be seen whether the discharge could have contained toxic heavy metals such as mercury or lead, or other contaminants.

“Who knows what else it was carrying? Usually when you find iron you find some other nasty stuff," he said.

An Indiana Department of Environmental Management spokesman said Tuesday that the agency was investigating and would provide an update after it receives and analyzes sampling test results.

Neither the EPA, IDEM or U.S. Steel indicated if any type of cleanup was planned.

Indiana Dunes National Park closed all of its beaches and the Portage Lakefront and Riverwalk on Sunday until further notice as a precaution, while Indiana American Water shut down its Ogden Dunes treatment facility Sunday night, also as a precaution.

The discharge plant comes weeks after a federal judge approved a revised settlement with the company, more than four years after the Portage plant discharged wastewater containing a potentially carcinogenic chemical into the Burns Waterway.

U.S. Steel agreed to pay a $601,242 civil penalty and more than $625,000 to reimburse various agencies for costs associated with their response in April 2017 after the plant spilled 300 pounds (136 kilograms) of hexavalent chromium — or 584 times the daily maximum limit allowed under state permitting laws.

Malkowski said in Monday's statement that sampling of the discharge found “no indications of permit level exceedances for hexavalent and total chromium, as those sampling results came in well below permit limits." 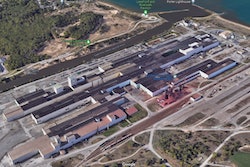