Her husband reported the vehicle "is driving itself." 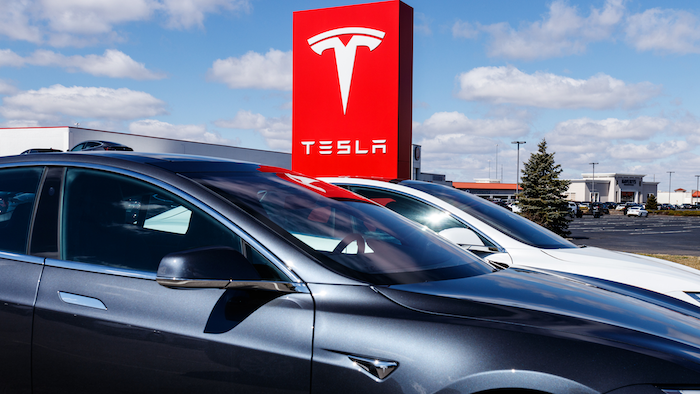 GLENDALE, Calif. (AP) — A woman who apparently passed out while her Tesla was on Autopilot and hit a Southern California freeway wall was arrested on suspicion of drunken driving, authorities said.

Karla Villanueva, 31, was arrested late Thursday in the Los Angeles suburb of Glendale. She was released Friday on her own recognizance pending a January court date, according to the jail information website of the Los Angeles County Sheriff's Department.

It wasn't immediately clear whether Villanueva had an attorney to speak on her behalf.

At about 11 p.m. Thursday, the Tesla hit a wall on an overhead transition roadway from State Route 134 to Interstate 5 and then continued to move until a California Highway Patrol car pulled in front of the car, which then slowed and stopped, authorities said.

Villanueva's husband reported that his wife “is unconscious in a Tesla. The vehicle is driving itself,” according to audio from a dispatch call obtained by KABC-TV.

The husband was following the Tesla in a Volkswagen, the dispatcher said.

“Again, apparently the wife is unconscious in the vehicle,” the dispatcher said. “And I guess there’s vehicles in front of it, that’s what’s causing the vehicle to slow down.”

CHP officers then woke up the driver, who was arrested after a DUI test.

Autopilot, which can keep vehicles in their lanes and stop for obstacles in front of them, has frequently been misused by Tesla drivers. They have been caught driving drunk or even riding in the back seat while a car rolled down a California highway.

Tesla and other manufacturers warn that drivers using their partially automated driving systems must be ready to intervene at all times.

The National Highway Traffic Safety Administration has opened a formal investigation into Tesla’s Autopilot system after a series of collisions with parked emergency vehicles. The investigation covers 765,000 vehicles, almost everything that Tesla has sold in the U.S. since the start of the 2014 model year. Of the 12 crashes identified by the NHTSA as part of the probe, 17 people were injured and one was killed.

The National Transportation Safety Board, which also has investigated some of the Tesla crashes dating to 2016, has recommended that NHTSA and Tesla limit Autopilot’s use to areas where it can safely operate. The NTSB also recommended that NHTSA require Tesla to have a better system to make sure drivers are paying attention. NHTSA has not taken action on any of the recommendations. The NTSB has no enforcement powers and can only make recommendations to other federal agencies.