Associated Press
The cause of the leak is under investigation.
iStock

LAPORTE, Texas (AP) — Two people are dead and dozens more were injured after a chemical leak at a Houston-area plant, officials said.

The incident happened about 7:35 p.m. Tuesday and involved an acetic acid leak at the LyondellBasell facility in the La Porte Complex, company spokesperson Chevalier Gray said in a statement. Emergency responders from the City of La Porte and Channel Industries Mutual Aid were on the scene.

Harris County Fire Marshal Laurie Christensen said at a news conference Tuesday night that one person was life flighted to a hospital and one was sent by ambulance. Five others were treated at the scene and dozens were being monitored for symptoms that could include difficulty breathing and swallowing and irritants or burns to the skin.

“Sometimes the terminology in these situations when there’s a leak, you think of something pouring out. A leak could also be something exploded off the top and the chemical came out. So once we get into the investigation, we’ll be able to specifically detail that out,” Christensen said.

The company said it was working closely with responders and confirmed that all those working in the area of the leak were accounted for. It said the leak was stopped and cleanup was in progress, and that air monitoring “continues to demonstrate no levels of concern for the community.”

The cause was under investigation, the company said.

Harris County Judge Lina Hidalgo issued a statement on Twitter saying that she was “heartbroken" to learn of the deaths.

La Porte is located about 25 miles (40 kilometers) southeast of Houston. The plant is in an unincorporated part of Harris County, adjacent to La Porte, according to a statement issued by La Porte EMS, and no shelter in place or other protective actions were recommended for the community. 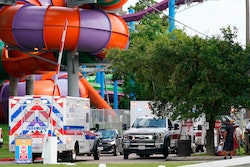