The fire reportedly started during maintenance work at the factory. 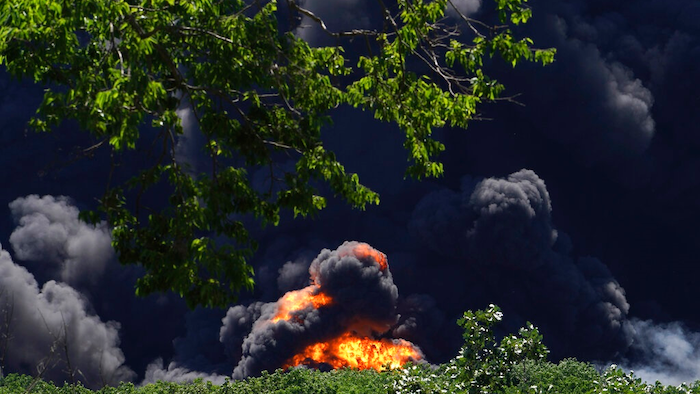 Flames and smoke are seen from an explosion at a chemical plant in Rockton, Ill., Monday, June 14, 2021.
Stacey Wescott/Chicago Tribune via AP

ROCKTON, Ill. (AP) — An explosion and massive fire at a chemical plant in northern Illinois that filled the sky with black smoke and forced the evacuation of hundreds of homes for days was started accidentally during maintenance work, a senior fire official said.

Rockton Fire Chief Kirk Wilson said in a press release Friday that the June 13 fire at the Chemtool plant near Rockton started when contractors were replacing insulation on an elevated heat transfer piping network. The system heats vessels used in the manufacture of lubricating greases.

“At the present time, the most credible scenario is that the scissor lift struck a valve or other piece of piping with sufficient mechanical force to cause the release of mineral oil,” Wilson said. “Chemtool operators promptly detected the release and shut down the boiler. They were in the process of placing containment booms, as well as de-pressuring the heat transfer piping network, when the fire ignited.”

Wilson did not say what ignited the oil, and he was not available for further comment. The cause of the explosion remains under investigation.

The explosions and resulting fires that burned for several days prompted officials to evacuate an estimated 1,000 residents who lived near the plant and they urged all who live within 3 miles (4.8 kilometers) of the plant to wear masks due to the threat posed by airborne impurities.

Nobody at the plant or in the surrounding community, located near the Illinois-Wisconsin state line, was injured, officials have said. Evacuated residents were able to return to their homes after four days.

10 Ways To Stay Safe In The Chemical Industry