Fiberglass and plastic pellets have already polluted nearby beaches. 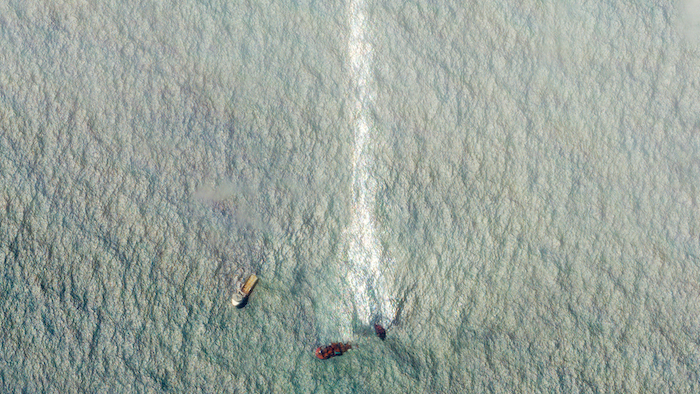 Results of the tests taken Thursday by the Marine Environment Protection Authority are still pending, the country's environment minister said.

The tests were prompted by satellite images from Planet Labs Inc. that showed a substance that could be oil in the water near the Singapore-flagged MV X-Press Pearl, which was devastated by a nearly two-week fire before it started sinking last week.

The fire destroyed most of the ship’s cargo, which included 25 tons of nitric acid and other chemicals. However, debris including burned fiberglass and tons of plastic pellets have already polluted nearby beaches and there are concerns that a spill of remaining chemicals and oil on the ship could devastate marine life.

The ship’s operator X-Press Feeders said in a statement Thursday night that “a grey sheen has been observed emanating from the vessel, and water samples are currently being tested.”

Nalaka Godahewa, state minister in charge of coast conservation, said in a tweet Thursday that the satellite “imagery could be misleading” and that both the Sri Lankan and Indian navy had confirmed to him that there was no large oil spill.

The fire erupted on May 20 when the ship was anchored about 9.5 nautical miles (18 kilometers) northwest of Colombo and waiting to enter the Sri Lanka's main port. The navy believes the blaze was caused by its chemical cargo.

The fire burned for 12 days before being extinguished last week. It then started sinking and attempts to tow it into deeper waters failed when the ship's stern sank to the seabed.

A Colombo court has banned the ship's captain, chief engineer and assistant engineer from leaving the country. The government has said it will take legal action against the owners of the ship to obtain compensation.