Engineers are still struggling to determine if the bridge can hold its own weight and the weight of construction crews. 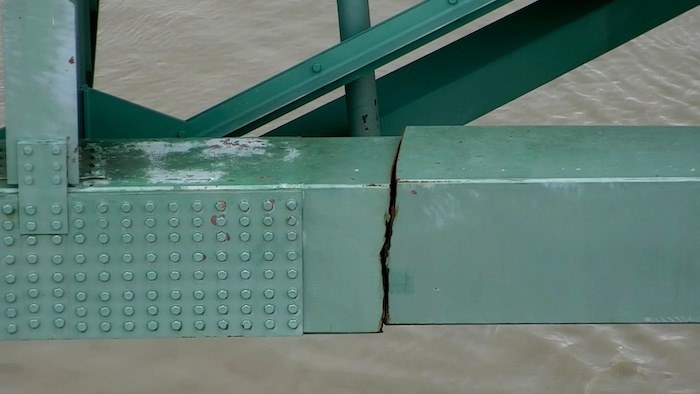 MEMPHIS, Tenn. (AP) — Repairs to the Interstate 40 bridge linking Arkansas and Tennessee could take months after a crack was found in the span, forcing thousands of trucks and cars to detour and shutting down shipping on a section of the Mississippi River, a transportation official said Wednesday.

A congressional Democrat from Tennessee flagged the crack as a warning sign of the urgent need to act on fixes to the nation’s infrastructure. Republican U.S. senators also pointed out the need for infrastructure spending while criticizing Biden's plan.

The six-lane bridge into Memphis was shut down Tuesday afternoon after inspectors found a “significant fracture” in one of two 900-foot (274-meter) horizontal steel beams that are crucial for the bridge’s integrity, said Lorie Tudor, director of the Arkansas Department of Transportation.

Both states' transportation agencies said they would make sure the 48-year-old, 1.8-mile (2.9-kilometer) bridge is safe before reopening.

“This fracture had the potential of becoming a catastrophic event that was prevented by our staff’s diligent effort in managing our bridge inspection program,” Tudor said. 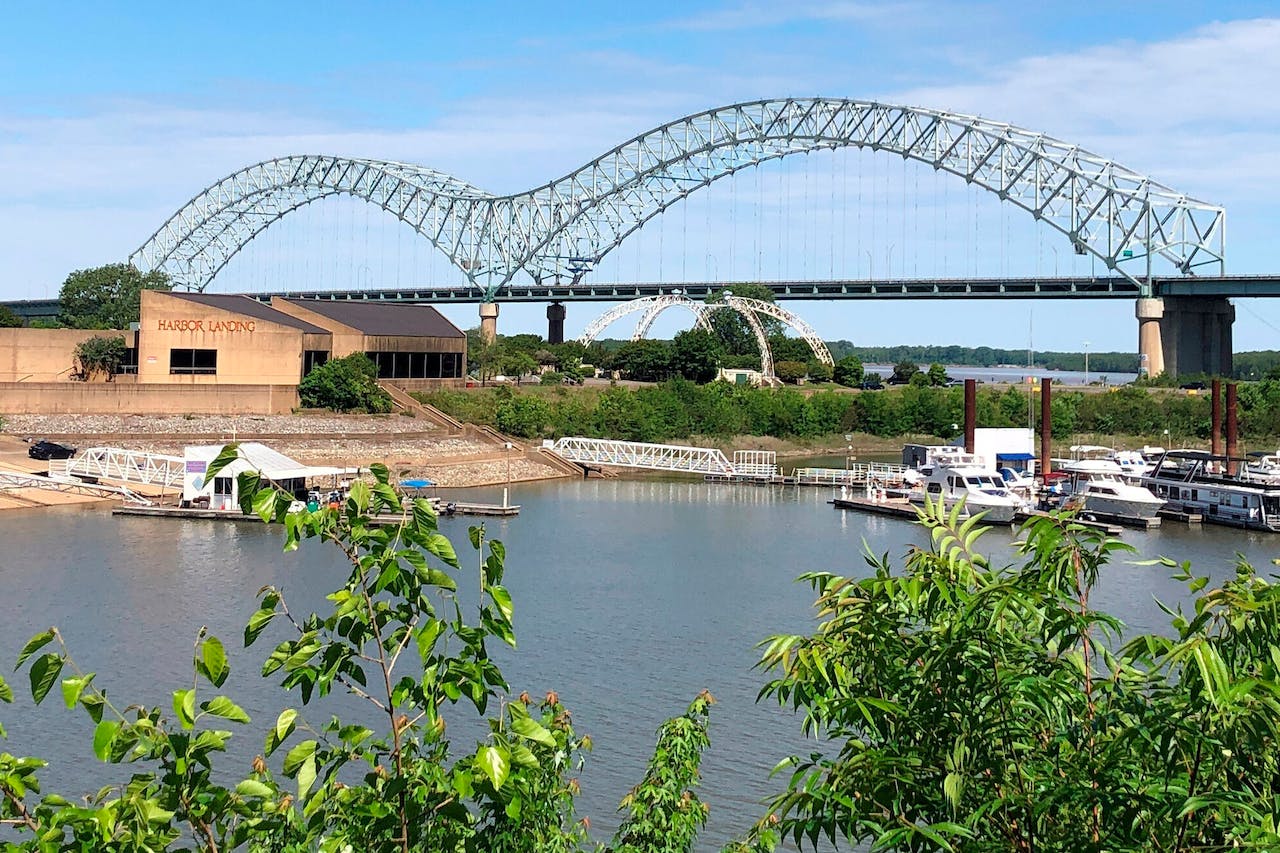 A crack in a steel beam, found the day before, has forced the closure of the Interstate 40 bridge that connects Arkansas and Tennessee, Wednesday, May 12, 2021, in Memphis, Tenn.AP Photo/Adrian Sainz

Traffic was being rerouted to Interstate 55 and the 71-year-old Memphis & Arkansas Bridge, about 3 miles (4.8 kilometers) south.

River traffic was also shut down in the Memphis area until further notice, the Tennessee Department of Transportation said. The U.S. Coast Guard said 16 tug boats hauling more than 220 barges were waiting in line Wednesday.

At least four tugs attached to barges sat idle Wednesday near a boat ramp at Meeman-Shelby Forest State Park, about 20 miles (32 kilometers) north of the bridge.

The closure is creating traffic congestion in Memphis and in neighboring West Memphis, Arkansas. DeWayne Rose, West Memphis' emergency manager, said officials there are using contingency plans to get trauma patients to facilities in Memphis or to other nearby hospitals. 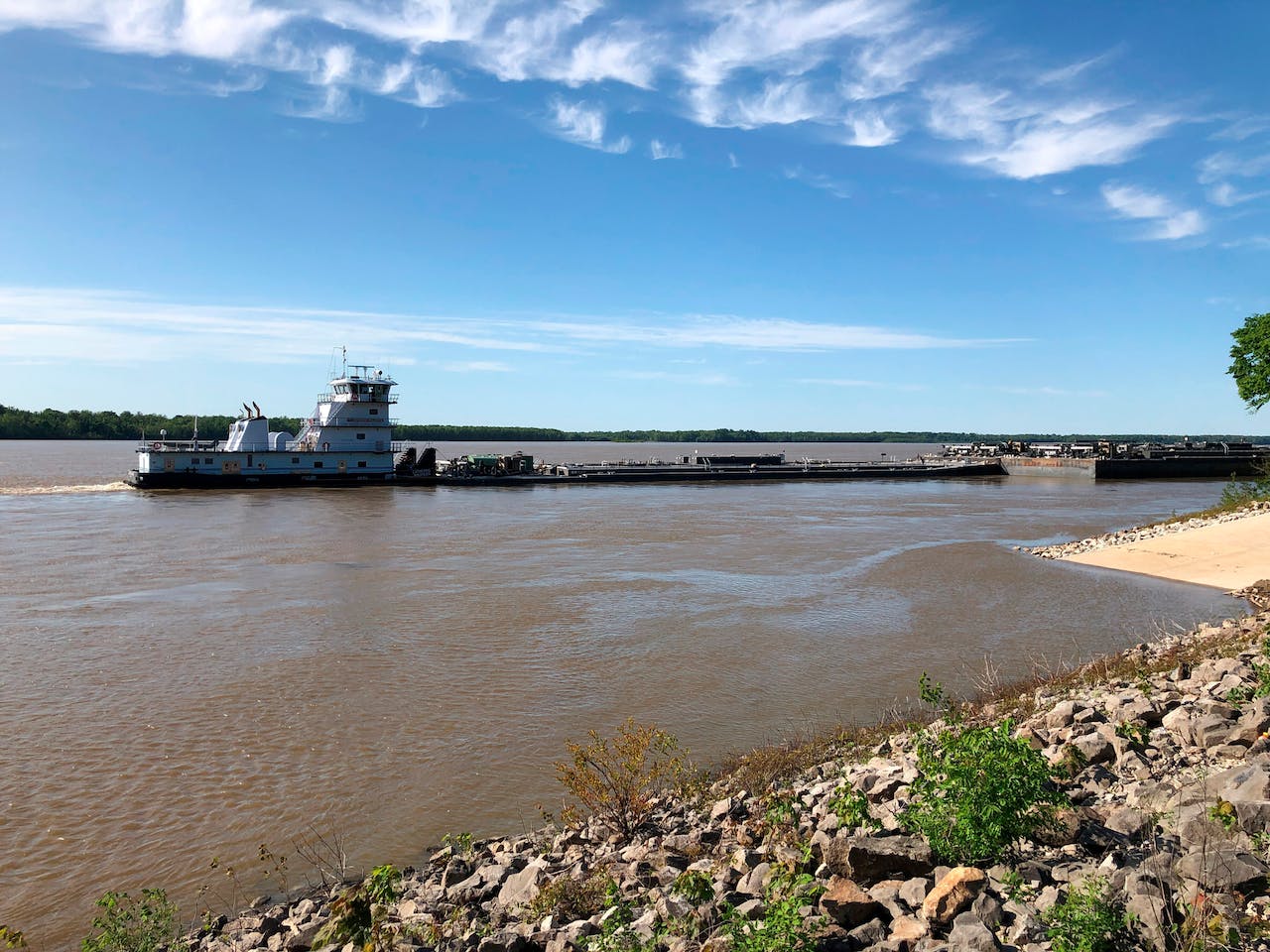 A tugboat with a barge attached sits near a boat ramp at Meeman-Shelby Forest State Park, Wednesday, May 12, 2021, in Millington, Tenn. A crack in the Interstate 40 bridge linking Tennessee and Arkansas has shut down Mississippi River traffic near Memphis, forcing tugs that are hauling barges to wait until they receive clearance that it's safe to pass under the closed bridge.AP Photo/Adrian Sainz

“People around this area are used to lane closures, they’re used to construction, they’re used to shutdowns, and I think everyone is just a little on edge because of the uncertainty of the time frame of this,” Rose said.

Road crews were poised to remove any cars that crash or otherwise become stuck on the four-lane I-55 bridge. The next nearest Mississippi River crossings are about 60 miles (96 kilometers) to the south near Lula, Mississippi, and 100 miles (160 kilometers) to the north near Dyersburg, Tennessee.

Inspectors were working to determine if the I-40 bridge could hold its own weight and the weight of construction crews, said Paul Degges, chief engineer for the Tennessee transportation department. Barge traffic will not resume until engineers decide that the bridge can stand on its own, he said.

Pinpointing those factors could take days, and the repairs could last much longer, Degges said.

“Certainly, it's plausible that this could be months rather than weeks,” Degges said during a news conference. “We are hopeful that we can find a solution that would allow us to proceed with some opening of traffic, but right now we just don’t know."

Engineers were also investigating the cause of the crack. Fatigue of having tens of thousands of vehicles pass daily over the bridge could be a contributing factor, Degges said.

“It’s fortunate that routine inspection averted a potential disaster, but the state of our crumbling infrastructure is deeply troubling,” said U.S. Rep. Steve Cohen, a Democrat whose district includes Memphis.

Cohen said he would work in a bipartisan manner with the congressional delegations from Arkansas and Tennessee to make sure I-40 bridge improvements are included in President Joe Biden’s infrastructure proposals.

Republicans in both states said the closure highlighted the need for infrastructure spending, but not Biden's $2.3 trillion plan, which they've argued is far too sweeping in its definition of public works.

“This underscores exactly what I heard from Tennesseans last week on the topic of infrastructure: investing in hard infrastructure—roads and bridges—is exactly the type of investments taxpayers will see a return on and will support," U.S. Sen. Bill Hagerty in Tennessee said.

Sen. John Boozman from Arkansas said he prefers a plan by GOP lawmakers that instead calls for spending $568 billion on infrastructure over five years.

“I think infrastructure is an urgent need. I don't agree with the president's plan at all," Boozman said.

Arkansas transportation officials said the crack did not appear in the last inspection of the bridge, which occurred in September 2020.

“I'm not trying to be all doom and gloom, but this is a pretty dire situation for the regional economy ... This is going to really create some potential problems for us," said Republican U.S. Rep. Rick Crawford, whose district includes the east Arkansas end of the bridge.

The span also has undergone about $280 million worth of retrofitting for the possibility of an earthquake.