City Cracks Down after Deaths of 23 Miners

There was a buildup of deadly levels of carbon monoxide in the shaft. 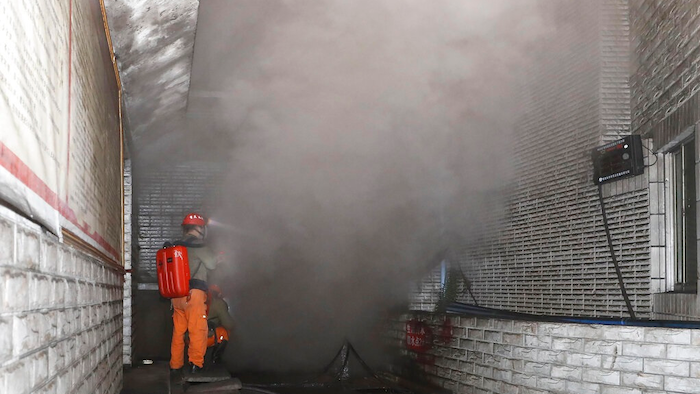 In this photo released by Xinhua News Agency, rescue workers gauge the density of carbon monoxide in the smog at the entrance of the coal mine in Yongchuan District of Chongqing, southwestern China, Friday, Dec. 4, 2020. China's state TV says more than a dozen coal miners have been killed by high levels of carbon monoxide in the country's southwest.
Huang Wei/Xinhua via AP

BEIJING (AP) — China’s southwestern megacity of Chongqing has ordered a crackdown on breaches of mine safety following last week's deaths of 23 workers in one of the country’s worst recent mining disasters.

State media reported Monday that officials were called to a video conference Sunday and told to undertake thorough reforms after the deaths at the Diaoshuidong mine, which was caused by the buildup of deadly levels of carbon monoxide in the shaft.

There have been no reports of arrests, although a full investigation has been launched into Friday's disaster. One miner was rescued from the mine, where the death toll had originally been put at at least 18.

Miners were reportedly dismantling equipment in the mine, which had been closed two months earlier and may have lacked the ventilation systems needed to clear the gas that leaks from the coal seam.

China’s coal mining industry used to be the world’s deadliest, suffering more than 5,000 fatalities a year from explosions, floods and gas leaks. Safety improved dramatically after authorities overhauled the industry starting about 15 years ago, boosting supervision and closing most smaller, more dangerous operations.

Sunday’s meeting was convened at the order of the Cabinet’s occupational safety office, underscoring the central government’s determination to avoid a return to the frequent disasters of the past. Attendees were told mine safety had been deteriorating for several months, citing also a Sept. 27 carbon monoxide poisoning case in Chongqing that killed 16 miners.