The electrical conduit support system failed, which put it in the travel path of the truck-tractor. 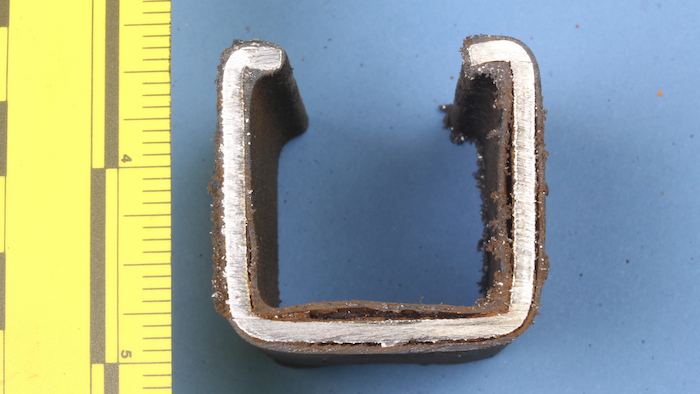 In this photo taken June 19, 2018, a cross-section of strut 16 from the Pennsylvania Turnpike Lehigh Tunnel no. 2 shows oxidation and PVC disbondment from the metal. The strut and other conduit support system and electrical conduit components were examined by the NTSB Materials Laboratory.
NTSB Photo by Matthew Fox

On Wednesday, February 21, 2018, a 70-year-old man was driving a 2017 International truck-tractor in combination with a 2017 Strick semitrailer, south on the Pennsylvania Turnpike. The truck was operated by Raymour & Flanigan Furniture.

After traveling about 1,000 feet through the 4,379-foot-long Lehigh Tunnel in East Penn Township, the truck-tractor struck a 10-foot-long section of electrical conduit whose support system had failed earlier and was hanging by electrical wires at a reduced height of about 8 feet 10 inches above the right lane.

The conduit impacted the vehicle’s windshield and struck the truck driver. The vehicle continued through the tunnel and, after exiting, moved left and crossed onto the median, where it struck the median guardrail. The impact redirected the vehicle to the right, across the southbound lanes, and onto the right shoulder of the highway, where the truck-tractor collided with the shoulder W-beam guardrail.

The truck driver died in the crash.

On August 20, 2020, the National Transportation Safety Board (NTSB) issued two safety recommendations to the Federal Highway Administration, based on its investigation into the crash.

Highway Accident Brief 20-04 details the NTSB’s investigation of the impact of a broken overhead electrical conduit with the semitractor-trailer.

NTSB and Federal Highway Administration investigators examined portions of the conduit and suspension system throughout the tunnel five days after the crash.

Investigators found corroded, fractured, and missing transverse conduit supports at multiple locations. In the area of the crash, nine transverse support struts had failed, for a total collapsed length of about 60 feet.

The 10-foot section that impacted the truck windshield was part of the collapsed 60-foot section. Damage to the conduit support system in this section appeared to include preexisting damage and damage caused by the collision.

The NTSB Materials Laboratory examined and analyzed several components of the electrical conduit and its support system. The examination and analysis revealed compromised PVC coating near the anchor rod holes and at cut ends of the support struts (likely due to being cut from longer sections, disturbing the protective PVC coating).

The general pattern of corrosion at the cut ends indicated disbonded PVC coating or no coating at all, which led to accelerated corrosion of exposed metal surfaces.

The NTSB notes that while steps taken before the crash by the Pennsylvania Turnpike Commission to replace the overhead electrical distribution system in Lehigh Tunnel no. 2 were consistent with available guidance, the commission did not sufficiently prioritize repairs to protect the motoring public’s safety.

“The National Tunnel Inspection Standards implemented by the Federal Highway Administration are essential for tunnel safety and the findings of this crash can be used to improve the guidance the standards provide to tunnel owners,” said Robert Molloy, Director of the Office of Highway Safety at the NTSB.

The NTSB determined the probable cause for the crash was the failure of the electrical conduit support system due to long-term corrosion, which resulted in displacement of the electrical conduit into the travel path of the semitractor-trailer. Contributing to the crash was the Federal Highway Administration’s insufficient guidance regarding tunnel maintenance and inspection, which led to the Pennsylvania turnpike Commission’s delay in repairing previously documented deficiencies in the support system.

Based upon its investigation, the NTSB issued two safety recommendations to the Federal Highway Administration. The first seeks notification by the FHWA to tunnel owners of the circumstances of the Lehigh Tunnel crash, with an emphasis on the importance of inspecting, documenting and properly repairing significant corrosion in nonstructural elements above roadways. The second seeks revision of the FHWA’s Tunnel Operations, Maintenance, Inspection, and Evaluation Manual; its Specifications for the National Tunnel Inventory; and its inspection training courses, with emphasis on classifying significant corrosion in nonstructural elements as a critical finding requiring immediate action.