Coronavirus Fear Touches Off a Global Run on Face Masks

Fear of the spreading coronavirus has led to a global run on sales of face masks despite evidence that most people who aren't sick don't need to wear them. 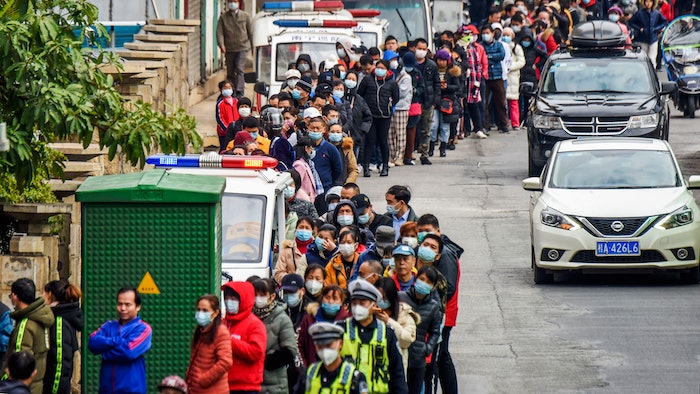 In this Jan. 29, 2020, file photo, people line up to buy face masks from a medical supply company in Nanning in southern China's Guangxi Zhuang Autonomous Region.
Chinatopix via AP, File

Fear of the spreading coronavirus has led to a global run on sales of face masks despite evidence that most people who aren't sick don't need to wear them.

Many businesses are sold out, while others are limiting how many a customer can buy. Amazon is policing its site, trying to make sure sellers don't gouge panicked buyers.

In South Korea, hundreds lined up to buy masks from a discount store. Rumors that toilet paper and napkins could be used as masks have emptied store shelves in Asia of paper goods over the past few weeks.

People trying to protect themselves from the outbreak and medical centers alike are facing shortages.

The shortages are being attributed not just to high demand, but to disruptions in supply: An outsize share of the world’s surgical masks are made in China — 50%, by its own estimate. But even factories there that have ramped up production say they are hard pressed to meet local demand. The government has taken over manufacturers, and exports have plunged.

“Before the outbreak of the epidemic, we used to export 600,000 to 700,000 surgical masks a month, but now the amount is zero," said David Peng, manager of Ningbo Buy Best International Trading Co. in Ningbo, south of Shanghai. The company's dozen or so suppliers in Hubei, near the center of the outbreak, have been ordered to prioritize government orders.

Apart from shortages of workers, manufacturers say they are struggling to get enough raw materials to make the masks. Tony Zhou, sales manager for Suzhou Sanical Protective Products Manufacturing Co., said his company is asking overseas customers if masks can be delivered a few months later.

In the U.S., Walgreens, Home Depot, Lowe’s and True Value Hardware are reporting a sharp uptick in sales of masks over the past several weeks and say they are scrambling to get more from suppliers.

Home Depot, the nation’s largest home improvement chain, has limited sales of N95 respirators to 10 per person. They have a close facial fit and more filtration material than general surgical masks, enabling them to keep out at least 95% of particles.

Marc Jaconksi, owner of Stanley’s True Value Hardware and Rental store in Philadelphia, said he saw a surge in demand for masks, particularly the N95, two weeks ago. But since Tuesday, when the U.S. Centers for Disease Control and Prevention warned that the virus will almost certainly spread in the U.S., sales went through the roof.

Jaconski said his store has sold 1,000 masks of all kinds in the past two weeks. He has ordered more N95s, but customers are so desperate they are picking up lightweight dust masks or buying heavy-duty respirators used for asbestos cleanup that sell for up to $60.

“It’s usually the oldest folks who get a little crazed,” he said. ‘’This time, it is everybody.’’

The virus has sickened more than 82,000 people worldwide and killed more than 2,800, according to international health authorities.

Still, the CDC doesn't recommend that people wear masks to protect themselves from the virus. The CDC says people infected — or those showing symptoms such as fever and shortness of breath — should wear masks to avoid spreading it to others. Health care workers also need masks, the agency says.

Mike Gania of the American Society of Health-Systems Pharmacists said some hospital pharmacies are saying that they have only a one- to two-week supply of masks and that the major wholesalers are unable to fill orders.

Dr. Sarah Boston, a veterinary surgical oncologist and author in Toronto, uses 10 to 15 surgical masks per week in her practice. She switched to a less comfortable brand when her usual supplier ran out.

“I've spoken to a lot of people who are worried that we're going to lose supply or not be able to get them,” she said.

Boston sees a lot of people wearing them incorrectly — over their mouths but not their noses, for example — and said they should understand that other things would be more effective, like frequent hand-washing.

Companies that make masks are struggling to keep up.

Medicom Group, a Montreal medical supply company, usually makes 150 million masks per year at its factory near Angers, France. At the beginning of February, the factory had orders for 500 million masks. Orders have only grown since then, the company said, and it has hired new workers and increased capacity at its plants, including two in Shanghai and one in Augusta, Georgia.

3M, the Minnesota-based manufacturer, said it has ramped up production of respirators at its facilities in the U.S., Europe, Asia and Latin America.

Many people in Asia routinely wear masks against allergies, colds and smog, and soaring demand has prompted other manufacturers to retool to begin making masks.

Taiwan manufacturer Foxconn, a major supplier of electronics to Apple, said it has begun making about 1 million masks a day for its own factories.

Dealmed, a New York company that makes and sells medical supplies, said it expects to sell out of face masks next week. It temporarily stopped taking orders from new customers a month ago and ended sales on Amazon and Walmart.com. It now is selling only to buyers that need them most, such as hospitals, doctors’ offices or government agencies.

Sales of gloves, gowns and other items jumped as much as 300% in February from the year before, said Michael Einhorn, Dealmed’s president. Sales of face masks are so astronomical, he said, he hasn’t been able to calculate them.

In Italy, the site of Europe's biggest cluster of cases, the government met with the country’s business lobby to work out a centralized distribution system to get masks to hard-hit areas.

Italy’s financial police announced they busted 20 people based in Turin for selling masks that were falsely said to offer complete protection against the disease. They were selling for as much as 5,000 euro apiece, or about $5,500.

On Amazon, the best-selling item in its health and household section Thursday was a pack of three cotton masks for $19.99. Ten-packs of 3M masks were sold out. And a listing for 100 disposable masks said it would arrive at shoppers’ doorsteps sometime in April or May.

Prices varied wildly on Amazon. Some sellers were charging $98.50 or more for 50 disposable surgical masks; others were charging $33 for a similar set. Hand sanitizers were also hard to find on the site, with some bottles of Purell and Amazon's own brand sold out.

Dr. John Huber, a clinical psychologist and chairman of the Austin, Texas-based nonprofit Mainstream Mental Health, said retailers need to do a better job of allaying customers' fears and sharing the CDC's advice.

"It’s the fear of the unknown,’’ Huber said. “Once we understand something, we tend not to be so fearful.”

US Warns Over Fraudulent Coronavirus Claims

Trump Says Coronavirus 'Very Well Under Control' in US