One firefighter is dead and 19 are injured. 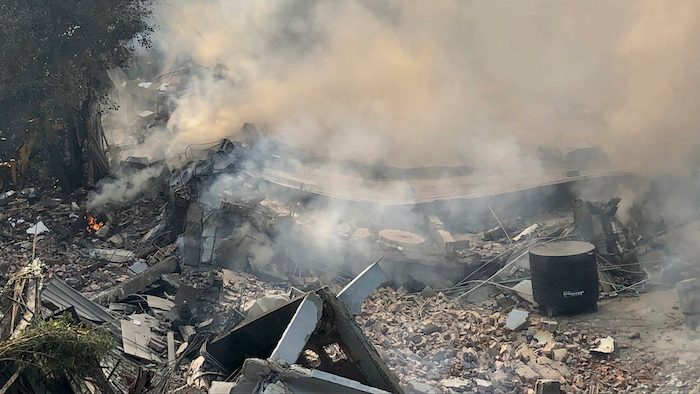 A fire official said three people were rescued from the debris of the building in the Peera Garhi area in western New Delhi. Thirty-five fire engines were rushed to the site and it took them more than 10 hours to douse the blaze.

Arvind Kejriwal, New Delhi state'e top elected official, said in a tweet that one of the injured firefighters had died.

The fire service control room said that 19 firefighters were injured in the operation and one of them later died in a hospital. One security guard also was injured in the fire, which broke out in the basement of the building.

Police said the rescue work was over.

There were no workers inside the building when the fire broke out around 4 a.m., the police said.

A heavy smoke engulfed the rear portion of the building, which had collapsed. It contained inflammable material like acid and plastic used for making batteries, police said. The cause of the fire was being investigated, police said.

Deepu Pandey, an eyewitness, many explosions could be heard coming from the building until it finally collapsed around 9 a.m.

“The basement in this building was very large as the entire stock of batteries used to be stored there. That’s why we can still hear explosions every now and then,” said Sarvan Maurya, who worked as a supervisor in the factory.

Poor safety standards are a frequent cause of fires in India. Last month, a fire believed to be caused by an electrical short circuit engulfed a building in New Delhi, killing at least 43 people.