It is the first congressional testimony by a Boeing official since the first of two Max crashes that together killed 346 people.

Associated Press
In this file photo officials inspect an engine recovered from the crashed Lion Air jet in Jakarta, Indonesia. On the anniversary of the first crash of a Boeing 737 Max, the CEO will begin two days of testimony before Congress.
AP Photo/Achmad Ibrahim, File

It's been exactly one year since a Boeing 737 Max crashed in Indonesia, and the company's CEO is likely to face tough questioning about the plane from a Senate committee.

Boeing Chairman and CEO Dennis Muilenburg was set to testify before the Senate Commerce Committee on Tuesday. It is the first congressional testimony by a Boeing official since the first of two Max crashes that together killed 346 people.

Indonesia investigators say Boeing's design of a key flight-control system contributed to the crash of a Lion Air Max last October. Another Max crashed in Ethiopia in March, and other Max jets were grounded. "Both of these accidents were entirely preventable," said Commerce Committee Chairman Roger Wicker, R-Miss.

In his prepared remarks , Muilenburg said the company knows it made mistakes and got some things wrong. He vowed to make the plane safe. Boeing is fixing flight-control software and hopes to win Federal Aviation Administration approval by year end to return the plane to flight. The FAA is also coming under scrutiny for relying on Boeing employees to perform some certification tests and inspections. It's an approach FAA has followed for many years.

"We need to know if Boeing and the FAA rushed to certify the Max," Wicker said. 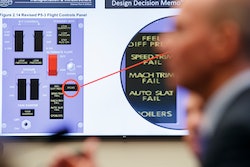