The preliminary plan filed in federal court is part of its effort to exit from Chapter 11 bankruptcy protection by next year. 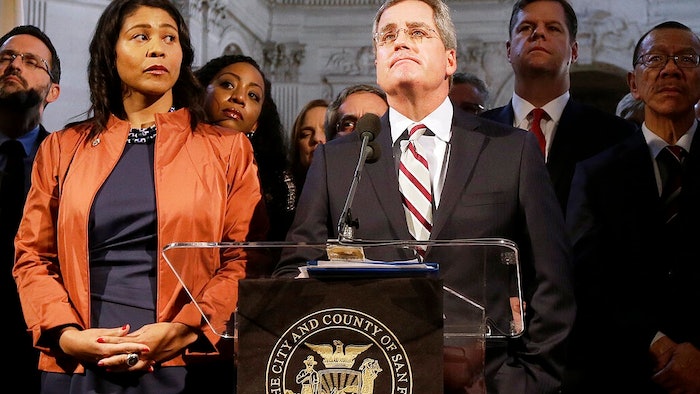 SAN FRANCISCO (AP) — PG&E Corp. proposed Monday to resolve its bankruptcy case by offering nearly $18 billion to settle claims from devastating wildfires started by its equipment in recent years — an amount immediately criticized by victims who said less than half of that is intended for them.

The preliminary plan filed in federal court is part of its effort to exit from Chapter 11 bankruptcy protection by next year.

PG&E sought the protection in January because it said it could not afford billions in damages from wildfires in 2017 and 2018 that were caused by company equipment, including a November fire that killed 86 people and largely destroyed the Northern California town of Paradise.

The company said in court papers it was confident it could raise more than $30 billion in debt and equity financing from the largest banks in the nation. The strategy would not result in rate increases for its customers, PG&E said.

"Under the plan we filed today, we will meet our commitment to fairly compensate wildfire victims and we will emerge from Chapter 11 financially sound and able to continue meeting California's clean energy goals," CEO and President Bill Johnson said in a statement.

PG&E is under deadline pressure to emerge from bankruptcy by June 2020 in order to participate in a state wildfire fund to help California's major utilities pay out future claims as climate change makes wildfires across the U.S. West more frequent and more destructive.

The plan, which must be approved by state regulators, proposes settling aside two trusts totaling $16.9 billion to pay victims and insurance companies. Another $1 billion will go toward local governments affected by the wildfires.

An attorney for the committee of wildfire victims involved in the bankruptcy case said she believes they are owed far more, and will urge the committee to oppose the plan.

"Huge disappointment in their attitude toward compensating victims of the fires," Cecily Dumas said.

The plan's filing came three days after San Francisco leaders offered to buy pieces of PG&E's assets for $2.5 billion so the city can run parts of the power system on its own.

Mayor London Breed and City Attorney Dennis Herrera said in a statement that the offer was "competitive, fair and equitable" and would lead to financial stability for the beleaguered investor-owned utility.

"We look forward to positive, collaborative discussions with PG&E on this critical issue," the statement issued Sunday said. "Throughout this process we will protect the best interests of our city as we strive toward the independent energy future that San Francisco deserves."

PG&E said in a statement that it doesn't believe the sale would be "in the best interests of our customers and stakeholders." About 452,000 of the utility's 5.4 million electric customers are in San Francisco.

San Francisco, where PG&E was founded more than a century ago, began examining options for taking over pieces of the utility after it filed for bankruptcy protection. The city isn't looking to buy any part of PG&E's gas system.

A May report by the San Francisco Public Utilities Commission said public ownership of the electric grid could help the city become carbon neutral by 2030 and stabilize electricity rates.

The city already has its own power system but relies on PG&E to deliver electricity to many customers.

Money for the purchase would come from a bond that voters agreed last year the city could use. State and federal regulators would need to sign off on any deal.

Cities previously could use eminent domain to take ownership of assets at fair market value. But under a new law passed by state lawmakers in July, the California Public Utilities Commission will get to consider other costs in deciding any local government's purchase of utility assets.