The crash comes as lawmakers push for funding to improve roads in New Mexico's share of the Permian Basin, given the rise in traffic from the oil boom. 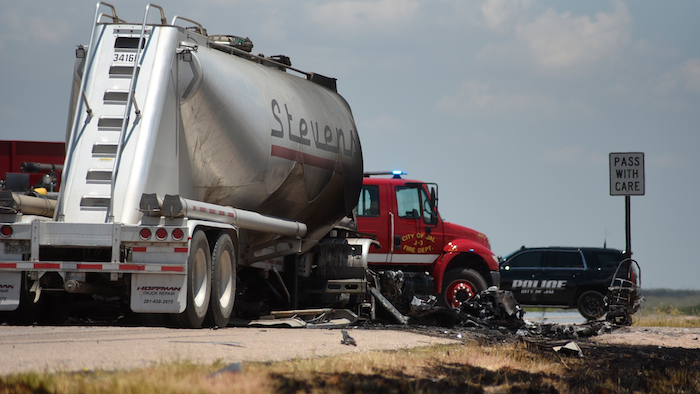 Four oilfield workers from Texas and the driver of tractor-trailer rig are dead following a fiery head-on crash on a New Mexico road in the heart of what has become the busiest oil and gas region in the United States, authorities said Friday.

The crash happened Thursday morning when the driver of a pickup truck carrying three passengers crossed the center line into eastbound traffic and collided with a tractor-trailer rig, police said. Both vehicles caught fire after the crash. The four workers in the pickup truck and the semi driver were all declared dead at the scene.

It's unclear what caused the pickup truck to cross lanes, but Officer Ray Wilson said Friday that alcohol does not appear to have been a factor.

The crash comes as local government officials and some state lawmakers have pushed for more funding to improve roads throughout New Mexico's share of the Permian Basin given the significant increase in traffic as a result of the ongoing oil boom. Mike Sommers, who leads the American Petroleum Institute, told The Associated Press earlier this year that part of the reason traffic remains a concern is that infrastructure — from roads to pipelines — hasn't caught up with the demands of the boom.

Crashes along New Mexico State Routes 31 and 128, as well as U.S. 285, have increased over the last year. In response, state transportation officials designated an 18-mile safety corridor aimed at getting drivers to slow down along U.S. 285. State police also have stepped up patrols and there are billboards throughout the area urging drivers to be cautious.

Thursday's crash occurred along State Route 128 east of Jal, which is about 195 miles east of El Paso, Texas. Police identified the driver of the pickup truck as Arturo Barboza, 22, of Odessa, Texas. His passengers were Alonso Hernandez, 19, and Enrique Leon, 58, both of Odessa, and Justin Brown, 25, of Montgomery. Police did not say what company the men worked for.

The driver of the tractor-trailer rig was identified as Rayshawnda Riley, 27, of Arlington. Police said the rig was used for hauling sand but was empty at the time of the crash.