International Airlines Group, the parent company of British Airways and other carriers, signed a letter of intent for 200 Boeing 737 aircraft. 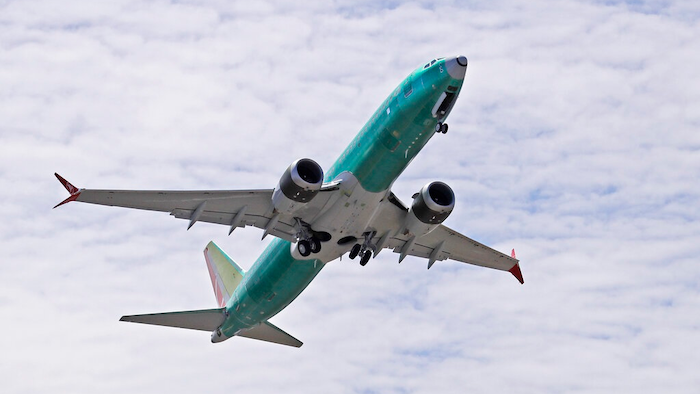 In this May 8, 2019, file photo, a Boeing 737 MAX 8 jetliner being built for Turkish Airlines takes off on a test flight in Renton, Wash. Boeing is selling its 737 Max planes again. The company announced at the Paris Air Show on Tuesday, June 18 that International Airlines Group signed a letter of intent for 200 Boeing 737 aircraft.
AP Photo/Ted S. Warren, File

The company announced at the Paris Air Show on Tuesday that International Airlines Group, the parent company of British Airways and other carriers, signed a letter of intent for 200 Boeing 737 aircraft.

Boeing said it's the first sale of the jetliner since the crash of an Ethiopian Airlines 737 Max in March. Another 737 Max crashed in Indonesia last year. All planes of the same model are now grounded amid an investigation of problematic software.

The letter of intent is subject to final agreement, but is a vote of confidence in Boeing as it struggles to win back trust from airlines, pilots, regulators and the traveling public.

The combination of 737-Max 8 and 737-Max 10 planes would cost $24 billion at list prices, though companies usually strike deals for discounts. The planes would be delivered between 2023 and 2027 to airlines owned by IAG.

IAG expressed optimism that regulators will allow amended Max jets to fly again soon. But it's unclear when that will be, notably for regulators outside the U.S.

The Ethiopian Airlines and Lion Air crashes killed 346 people. Boeing executives started off the Paris Air Show on Monday with a sweeping apology to victims' families and airlines.

Analysts had predicted that Boeing might try to announce some Max orders at the air show to demonstrate that the plane - one of Boeing's most popular models - still has support.

Boeing depends heavily on the aircraft and has said it is costing at least $1 billion to address problems with the troubled jet. But the company has struggled to get a handle on the Max controversy.

The CEO says Boeing botched communication with regulators and is promising more transparency.

After lackluster sales in recent months, Boeing's orders picked up Tuesday. It announced a deal with Korean Air and Air Lease Corporation for a total of 30 long-range 787 jets, worth $6.3 billion at list prices.

Airbus also reported sales to Delta Air Lines, Saudi Arabian Airlines and Atlantic Airways, and announced a feasibility study for vertical takeoff and landing aircraft that could shuttle visitors to the Paris 2024 Olympics.

Both Airbus and Boeing face a slowing economy that tempered the mood at the air show .

The companies, along with other manufacturers, came together Tuesday to promise more investment in reducing aviation emissions even as global air travel is expected to rise significantly in the decades to come.

Plane makers are under increased pressure from regulators and passengers concerned about climate-damaging emissions. They are looking at hybrid, electric or hydrogen technology to eventually replace existing fuel.

More than 238,000 sedans can suddenly lose the power assist in the brake system.
Nov 18th, 2021
Follow Us
Most Recent