Video shows that the downed crane ripped a large hole in the east side of the building and landed on an adjacent parking garage. 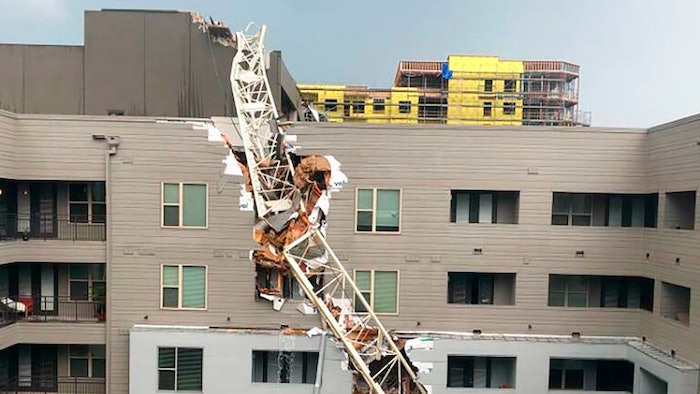 This photo provided by Michael Santana shows the scene after a crane collapsed into Elan City Lights apartments in Dallas amid severe thunderstorms Sunday, June 9, 2019.
Michael Santana via AP

DALLAS (AP) — A construction crane buffeted by high winds during a storm toppled on a Dallas apartment building Sunday, killing one woman in the building and injuring five other people, two of them critically, a fire official said.

Crews searching the Elan City Lights building found the body of a woman inside after the crane collapsed and ripped a large gash into the side of the five-story structure, Dallas Fire-Rescue spokesman Jason Evans said during a press briefing.

"The building itself has suffered multiple collapses in different areas of the building to include residential spaces and the parking garage," Evans said.

Of those injured, two were listed in critical condition, two suffered serious injuries and one suffered minor injuries and was later discharged from a hospital, Evans said. Earlier, he had said that six people were injured but said the figure would likely change.

First responders searched every apartment they could reach and found no other victims, Evans said. He also said that every resident of an apartment damaged by the crane was either out at the time or was among those taken to hospitals.

Crews were called to the site of the collapse just before 2 p.m., after the National Weather Service issued a severe thunderstorm watch for the Dallas/Fort Worth area and warned of winds up to 70 mph (113 kph). Evans said the reason the crane fell is unknown but there is a "strong possibility" that the winds "played some role in the collapse."

Across Dallas the storm felled mature trees and knocked out power Sunday, leaving many areas without working traffic lights.

Isaiah Allen told the Dallas Morning News he was in his apartment when he heard what he thought was a deafening thunderclap. "I saw that the crane had actually fell straight through the building and had destroyed a good eight to 10 apartments and so there's like floors and stuff falling through," he said.

Allen told the paper he saw a bloodied woman trapped in her apartment on the second floor.

Yesenia Bosquez's family had moved into their top-floor apartment just two weeks ago. She returned from a shopping trip to find her apartment, where she'd left her husband, Jay, to recover from a shoulder injury, crushed by the twisted metal.

It took about 30 minutes for authorities to tell her that her husband had been rescued alive and had been holding their dog while medics worked on his injuries.

Video shows that the downed crane ripped a large hole in the east side of the building and landed on an adjacent parking garage.

The company that owned the crane, Bigge Crane and Rigging Co., said in a statement it was mobilizing personnel to the site to find out more about the crane collapse and would cooperate with any investigation.

Evans said "every single level of the parking garage in part has collapsed" and that multiple vehicles were damaged. He said he was not sure if anybody was in the garage at the time of the collapse.

Rescue personnel used dogs to try to find people who might be trapped inside the rubble.