78 people were killed last month by a chemical explosion.

Associated Press
In this file photo taken on March 22, 2019, and released by Xinhua News Agency, foam is sprayed at the site of an explosion at a chemical industrial park in Xiangshui county of Yancheng in eastern China's Jiangsu Province. Authorities are shutting down an eastern China industrial park after 78 people were killed last month by a chemical explosion. The city government said Friday, April 5, 2019 that local departments have met to discuss how to eliminate chemical plants with low safety standards and severe pollution issues.
Li Bo/Xinhua via AP, File

BEIJING (AP) — Authorities are shutting down an eastern China industrial park after 78 people were killed last month by a chemical explosion, the city government said Friday.

Local departments have met to discuss how to eliminate chemical plants with low safety standards and severe pollution issues, Yancheng city said in an online statement, noting that the site of last month's deadly blast — Xiangshui Chemical Industrial Park — will be completely shut down.

In 2017, an explosion that killed 10 at a nearby plant prompted the State Administration of Work Safety to dispatch inspectors. They discovered over 200 safety hazards at Yancheng chemical factories, including 13 at the Tianjiayi plant where the most recent explosion occurred.

The blast ultimately claimed 78 lives and left dozens with severe injuries, according to state broadcaster CCTV.

The government will support the construction of "No-Chemical Zones" and raise standards for those regions that do house chemical enterprises, the Yancheng city statement said.

Last month's explosion "used blood to teach us a lesson," it said. 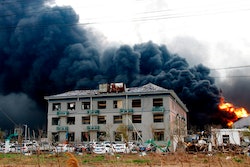