The plant makes disposable paper products like plates and cups.

Associated Press
Firefighters from Waterville reach the roof of the Huhtamaki mill for a fire that had several departments respond on Tuesday evening, Jan. 29, 2019.
David Leaming/Morning Sentinel via AP

WATERVILLE, MAINE (AP) — Officials say a blaze that drew crews from more than a dozen fire departments to a paper products plant in Waterville, Maine, started in a malfunctioning dryer unit.

One firefighter was hurt Tuesday night while battling the blaze at the Huhtamaki plant on the Waterville-Fairfield line. The Waterville School Department brought buses to the scene so firefighters could escape the cold to warm up.

A Huhtamaki spokesman says all of the employees were evacuated safely, and officials say the firefighter was released from the hospital Wednesday morning.

The plant makes disposable paper products like plates and cups.

Firefighters say they saw flames shooting out of the roof when they arrived. The temperature was in the single digits as firefighters battled the blaze. 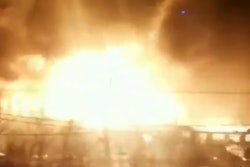