Dead fish, garbage and refuse are floating on the banks of the Paraopeba River, which feeds into a larger river that supplies drinking water to tens of thousands of people. 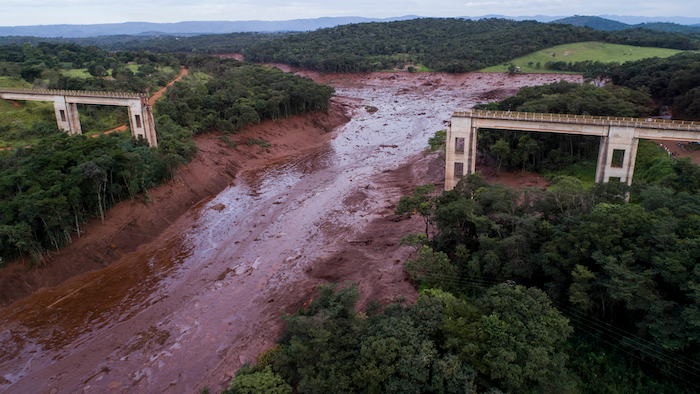 An aerial view shows a collapsed bridge caused by flooding triggered by a dam collapse near Brumadinho, Brazil.
Bruno Correia/Nitro via AP

BRUMADINHO, Brazil (AP) — Authorities say the death toll from the dam breach at a Brazilian iron ore complex has increased to 84. Lt. Flavio Godinho of the Minas Gerais state civil defense agency also says the number of missing stands at 276.

Searchers are still looking for survivors or bodies in the muck that poured out of the dam last Friday in the small city of Brumadinho, inundating buildings owned by big mining company Vale SA and nearby neighborhoods. Grieving family members of victims were burying some of the dead on Tuesday and there was mounting anger directed at Vale, the world's largest miner of iron ore.

Possible ecological damage from the dam is visible in an indigenous community about 11 miles downstream from the dam. The normally greenish Paraopeba River was dark brown on Tuesday. Dead fish, garbage and refuse were seen floating on its banks by an Associated Press reporting team.

Pataxco Indians living there say they had been told by Brazilian environmental workers not to fish, take baths in the river or use river water to water the plants they cultivate for food.

Two Brazilian Institute of Environment and Renewable Natural Resources officials were taking water samples and talking to members of the tribe. The agents said they did not have authorization to speak with the AP team.

In a statement sent to The Associated Press on Tuesday, the agency said it asked Vale to "remove the dead fish, which are having an impact on the indigenous population." The statement gave no details about the water tests and did not say whether tribal members had been told the water was unhealthy.

The signs of possible ecological consequences came as the arrests of company workers with links to the dam were made in Sao Paulo and in the state of Minas Gerais. Authorities arrested five people Tuesday in connection with the collapse of the dam.

Three of the arrested worked for Vale, the company said, adding that it was cooperating with investigating authorities. A German company that has inspected the dam said two of its employees were arrested. The Munich-based TUEV Sued company declined to specify whether the arrested staff were from its German headquarters or its Brazilian branch.

In ordering the arrests, Minas Gerais state judge Perla Saliba Brito wrote that the disaster could have been avoided.

"It's not believable that dams of such magnitude, run by one of the largest mining companies in the world, would break suddenly without any indication of vulnerability," the judge wrote in the decision, according to news portal UOL. Authorities said the five will be detained for 30 days while officials investigate possible criminal responsibility.

The pollution from the incident is now heading down the Paraopeba River with high concentrations of iron oxide, threatening to contaminate a much larger river that provides drinking water to communities in five of the country's 26 states. Brazilian authorities and companies involved with river water management are trying to figure out how to prevent contamination.

Their main focus is the Retiro Baixo hydroelectric dam and plant complex about 186 miles from Brumadinho. Officials and environmentalists hope the dam's reservoirs can be used to isolate the muck so it can be cleaned before that water is released to head farther downstream to the Sao Francisco River.

"A lot of communities and cities in different states depend on that river to live," said Carlos Rittl, a director at Brazil's Climate Observatory environmental nonprofit group. The "wave" of muddy water and waste is expected to reach the dam between February 5-10, Brazil's National Water Agency has said. Researchers from the Geological Survey of Brazil are monitoring the velocity of the mine waste and the estimate could change.

Technicians for Furnas, the company that operates the Retiro Baixo dam, are monitoring the sludge moving toward the plant and its density, and have concluded it poses no structural risk to the dam, the company said in a statement. The reddish-brown mud is destroying vegetation and aquatic life, according to the Geological Survey of Brazil.

Vale is the world's largest producer of iron ore, which is the raw ingredient for steel. The company is one of Brazil's largest businesses and a key employer in Brumadinho, but many residents have complained that a siren, which should have gone off to warn people to evacuate, never sounded Friday.

Military police Col. Evandro Borges told reporters that most of the people missing were Vale employees. Many employees were eating lunch when the dam collapsed, burying a cafeteria and other company buildings.