IEN Staff
In this photo released by Xinhua News Agency, firefighters try to extinguish burning vehicles in the aftermath of an explosion at a plant operated by the Hebei Shenghua Chemical Industry Co. Ltd that destroyed dozens of vehicles nearby on Wednesday, Nov. 28, 2018 in Zhangjiakou city, northeastern China's Hebei province.
Xinhua via AP

According to a statement from ChemChina, vinyl chloride leaked during production and caught fire.

According to a report from Reuters, the fire caused a chain explosion that burned trucks and buildings.

ChemChina has apologized for the accident and noted that it uncovered serious problems in the company's safety management systems.

Industrial safety is a major concern in China, where requirements for the storage and transport of chemicals and other dangerous products are often weakly enforced. 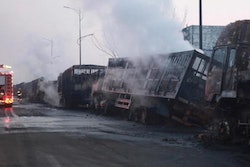