One of its boats sank in a Missouri lake in July, killing 17 people.

In this July 23, 2018 file photo, the duck boat that sank in Table Rock Lake in Branson, Mo. Ripley Entertainment, the company that owns the Ride the Ducks operation in Branson asked a judge Monday, Oct. 1, 2018, to dismiss some of the lawsuits filed after one of its boats sank in a Missouri lake in July, killing 17 people. Survivors and relatives of those who died on the boat have filed several lawsuits against Ripley Entertainment and five other businesses.
Nathan Papes/The Springfield News-Leader via AP, File

KANSAS CITY, Mo. (AP) — The company that owns the Ride the Ducks operation in Branson asked a judge Monday to dismiss some of the lawsuits filed after one of its boats sank in a Missouri lake in July, killing 17 people.

Ripley Entertainment said in its motions that the boat's sinking on Table Rock Lake was "an unforeseeable and unintentional occurrence" and that the company's amphibious vehicle tours complied with U.S. Coast Guard regulations, The Kansas City Star reported .

The boat went down on July 19 when a strong thunderstorm blew in shortly after it headed out on the lake near Branson with 31 people on board.

Survivors and relatives of those who died have filed several lawsuits against Ripley and five other companies involved with the manufacture and operation of the tourist attraction. They contend the boat's operators should not have put the boat on the lake because of the weather. They also contend that the manufacturers ignored warnings for years that the boats' design should be changed to reduce the risk of sinking.

Ripley also asks the judge to strike what it calls hyperbolic and inflammatory language from the lawsuits, which the company contends would make it more difficult to receive a new trial.

"The facts show that Defendants had an impeccable safety record with vessels certified by the U.S. Coast Guard as in full compliance with applicable regulations," Ripley Entertainment says in its motions.

Andrew Duffy, a Philadelphia attorney representing some of the lawsuit plaintiffs, said he will "vehemently oppose" the motions that seek to dismiss the lawsuits.

"We stand by our well-pled complaints and nothing in the motions to dismiss will prevent these matters from moving forward," Duffy said.

The motions for dismissal were over lawsuits filed by John Coleman, brother of drowning victim Ervin Coleman; Lisa Berry and Marlo Rose Wells, suing on behalf of the estates of Belinda Coleman, Angela Coleman and Maxwell Ly; and Tia Coleman, who survived the sinking and also sued on behalf of some of her relatives who died on the boat, Glenn Coleman, Reece Coleman, Evan Coleman and Arya Coleman.

It is unclear how the lawsuits will proceed. The U.S. attorney for the Western District of Missouri has asked a federal judge overseeing the lawsuits to halt most of the discovery in the civil cases while it investigates whether criminal charges are warranted. 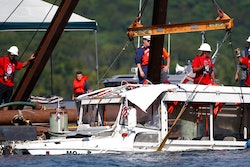 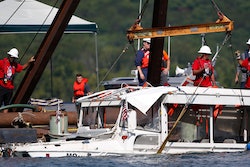 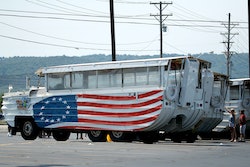