Two federal agencies are investigating, along with Tesla, after what she said was an "out of the blue" fire.

WASHINGTON (AP) — One federal safety agency has dispatched an investigator and another says it is gathering information on a Tesla battery fire in Southern California.

The National Transportation Safety Board said Monday it is sending a technical specialist to watch Tesla's examination of the Model S that caught fire Friday on a street in West Hollywood. The National Highway Traffic Safety Administration said in a statement that it "continues to collect information regarding this incident and will take appropriate action as warranted."

Actor Mary McCormack shared video of her husband's Tesla car shooting flames near the front wheels. She says in a tweet that there was no accident and the incident was "out of the blue." McCormack is married to director Michael Morris.

The NTSB makes recommendations on transportation safety issues, while NHTSA has authority to seek regulations and recalls.

In a statement, the NTSB said the trip will allow the agency to learn about fires in all battery-powered vehicles.

Tesla called the incident "an extraordinarily unusual occurrence" and says it's working to understand the cause of the fire. No one was hurt in the blaze. 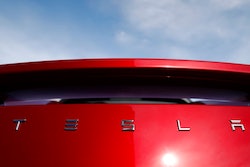 Tesla Cuts 9 Percent of its Workforce 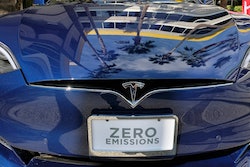