The airline opposed a recommendation by the engine manufacturer to require ultrasonic inspections of certain fan blades within 12 months. 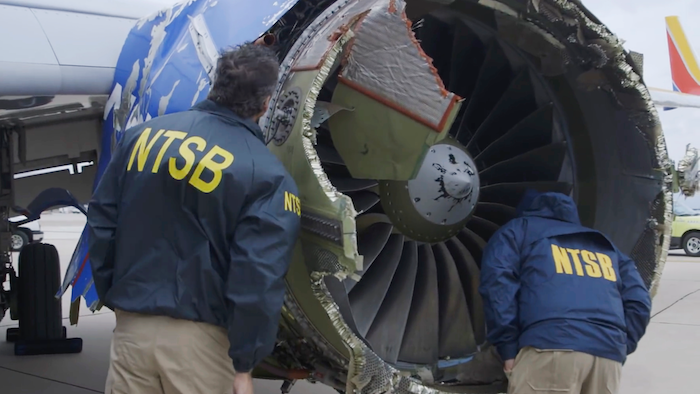 National Transportation Safety Board investigators examine damage to the engine of the Southwest Airlines plane that made an emergency landing at Philadelphia International Airport in Philadelphia on Tuesday, April 17, 2018.
NTSB via AP

DALLAS (AP) — Southwest Airlines sought more time last year to inspect jet-engine fan blades like the one that snapped off during one of its flights Tuesday in an accident that left a passenger dead. The airline opposed a recommendation by the engine manufacturer to require ultrasonic inspections of certain fan blades within 12 months. Southwest said it needed more time, and it raised concern over the number of engines it would need to inspect.

It wasn't until after Tuesday's accident that the Federal Aviation Administration announced that it will soon make the inspections mandatory. It is unclear how many planes will be affected by the FAA order. Airlines including Southwest say they have begun inspections anyway.

An engine on a Southwest jet exploded over Pennsylvania on Tuesday, and debris hit the plane. Jennifer Riordan, a 43-year-old bank executive from Albuquerque, New Mexico, was sucked partway out of the jet when a window shattered. She died later from her injuries. The Boeing 737, bound from New York to Dallas with 149 people aboard, made an emergency landing in Philadelphia.

Investigators said the blade that broke off mid-flight and triggered the fatal accident was showing signs of metal fatigue — microscopic cracks from repeated use. The National Transportation Safety Board also blamed metal fatigue for the engine failure on a Southwest plane in Florida in 2016 that was able to land safely.

That incident led manufacturer CFM International, a joint venture of General Electric Co. and France's Safran SA, to recommend in June 2017 that airlines conduct ultrasonic inspections of fan blades on many Boeing 737s. In August, the FAA proposed making the recommendation mandatory. The oldest blades would be inspected within six months, while many others would face an 18-month deadline. CFM commented that the longer deadline be shortened to 12 months.

During the public-comment period, which closed in October, Southwest and several other carriers raised objections. Southwest pushed back against CFM's request for a 12-month deadline, and American Airlines asked for even more time — 20 months. The FAA never issued a final decision. A spokesman said the agency juggles dozens of rules simultaneously, and the time to complete a final regulation varies based on many factors including complexity of the issue.

On Wednesday, the agency said it would issue a directive in the next two weeks to require the ultrasonic inspections of fan blades on some CFM56-7B engines after they reach a certain number of takeoffs and landings. Blades that fail inspection would need to be replaced.

Southwest announced its own program for similar inspections of its 700-plane fleet over the next month. When asked why the airline resisted the proposal last year, spokeswoman Brandy King said Southwest needed more time to find individual suspect blades within certain engines. She said Southwest had already inspected half of the blades identified in the engine maker's notice before Tuesday's accident.

A Delta Air Lines spokesman said that airline had done all the necessary inspections, but he didn't know how many planes that involved. American Airlines said it has inspected blades on the oldest affected engines, and United Airlines said it has started inspecting its 737s.

While recommendations from airplane and engine manufacturers like CFM are not mandatory — only regulators can force airlines to act — the carriers often follow the recommendations to reduce their liability in case of accidents. Critics said the airlines were slow to act.

"The public should be worried (because) a manufacturer sent out a warning, and Southwest and others didn't do it," said Mary Schiavo, a former inspector general of the Transportation Department, FAA's parent agency. "They didn't get the inspections done, and when the FAA was going to put out (an order) they all objected."

Last year, the agency estimated that an order would cover 220 engines on U.S. airlines, and each Boeing 737 has two CFM engines. Airlines say the number of engines needing blade inspections will be much higher, partly because since last summer more engines have hit the number of flights triggering an inspection.

The FAA estimated the industry's labor costs to comply would be just $37,400, but that doesn't include the cost of new blades. One repair shop said new blades cost $50,000 each while overhauled ones are less than $30,000. Each CFM56 engine has 24 blades. Tuesday's emergency broke a string of eight straight years without a fatal accident involving a U.S. airliner.

Robert Sumwalt, chairman of the NTSB, said the dangerous kind of engine breakup that occurred Tuesday — called an uncontained failure because pieces were shot out like shrapnel — should not have happened. But he and other aviation experts have cautioned against draw any broad conclusions yet about the safety of CFM56 engines or Boeing 737 jets.

CFM International says the engines are used on 6,700 planes around the world. Uncontained engine failures are rare — about three or four a year, according to Sumwalt. It is unknown whether the FAA's original directive would have forced Southwest to quickly inspect the engine that blew up.

Southwest CEO Gary Kelly said the plane was inspected on Sunday and nothing appeared out of order.