Petroleum coke is cheaper and burns hotter than coal, but it contains far more heart- and lung-damaging sulfur. 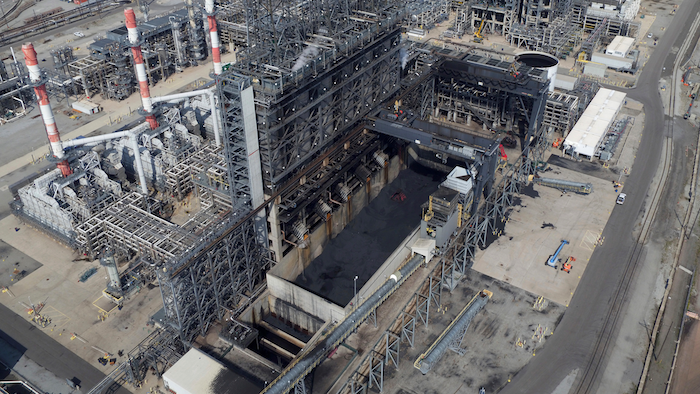 In this Sept. 21, 2017 photo, petroleum coke, the grainy black byproduct of refining Canadian tar sands oil, is visible at the BP Whiting refinery in East Chicago, Ind. The U.S. is the world's largest producer and exporter of "petcoke," with the largest share being shipped to India in recent years. The high-carbon, high-sulfur fuel is dirtier than coal, and has been burned unregulated in Indian factories and power plants, contributing to that nation's already-high air pollution levels.
DroneBase via AP

NEW DELHI (AP) — U.S. oil refineries that are unable to sell a dirty fuel waste product at home are exporting vast quantities of it to India instead.

Petroleum coke, the leftover from refining Canadian tar sands and other heavy crude, is cheaper and burns hotter than coal. But it also contains more planet-warming carbon and far more heart- and lung-damaging sulfur — a key reason few American companies use it.

Refineries are sending it around the world instead, especially to energy-hungry India, which last year got almost a fourth of the fuel grade "petcoke" the U.S. ships, an Associated Press investigation found. In 2016, the U.S. sent more than 8 million metric tons of petcoke to India — about 20 times more than in 2010, and enough to fill the Empire State Building eight times.

The petcoke burned in countless factories and plants is contributing to dangerously filthy air in India.

Resident Satye Bir doesn't know why Delhi's air is so dirty, but feels fury and resignation.

"My life is finished....My lungs are finished," said Bir, 63, wheezing and reaching for an inhaler. "This is how I survive. Otherwise, I can't breathe."

Tests on imported petcoke used near the capital found 17 times more sulfur than the limit for coal, according to India's Environmental Pollution Control Authority. India's own petcoke, produced domestically, adds to the pollution.

Industry officials say petcoke has been an important fuel for decades, and its use recycles a waste product.

"We should not become the dust bin of the rest of the world," said Sunita Narain, a pollution authority member who heads the Center for Science and the Environment. "We're choking to death already."

The American Fuel and Petrochemical Manufacturers told the AP that cokers "allow the United States to export petroleum coke to more than 30 countries to meet growing market demand."

But experts say it's not market forces that are driving U.S. refiners to sell this waste product. They say refineries just need to get rid of it, and are willing to discount it steeply.

Petcoke is sold around the world. Among the largest traders are Oxbow Energy Solutions and Koch Carbon, led by members of the politically conservative Koch family.

Neither they nor a dozen U.S. oil companies and traders contacted by the AP would talk about petcoke. They cited past controversies over waste storage at Midwest refineries or wanted to avoid angering business partners.

In India, no factory managers would allow AP access, and the country's federal officials did not respond to interview requests.

About 1.1 million Indians die prematurely as a result of outdoor air pollution every year, according to the nonprofit Health Effects Institute.

It's impossible to gauge how much pollution is from petcoke versus other sources. But experts say it is contributing to the problem. Last year, 65 percent of India's petcoke came from the U.S., according to trade data provider Export Genius.

In Moradabad, dozens of factories buy petcoke from middlemen, according to Sarvesh Bansal, who leads the local environmental group WatAir.

"We want the factories moved very far away from here," said rice farmer Mohammad Sarfaraz, 25, who lives in nearby Farid Nagar. He and others don't know what pollutants are being spewed, but they protested at factories a few years ago. "Many illnesses occur because of the factories."

J.P. Gupta, whose Moradabad factory makes acrylic fibers for clothing, said he burns Indian petcoke. The factory spent about $300,000 to control sulfur, he said, but would have spent 50 percent more on pollution controls for U.S. petcoke, which he says is dirtier.

"There are some who are not bothering about the pollution," he said.

At an open-air brick kiln down the road, workers shoveled petcoke and coal into a furnace. Such small factories account for at least a quarter of India's energy generation.

The Indian environment ministry has denied petcoke threatens New Delhi's public health. However, National Green Tribunal judges demanded in May that the government investigate petcoke's health impacts. And the Supreme Court later banned petcoke use by some industries in states surrounding the capital and demanded pollution standards that could further limit use nationwide.

"It's a classic case of environmental dumping," said Lorne Stockman, director of the environmental group Oil Change International. "They need to get rid of it, so it's dumped into a poor, developing country."