Pacific Gas and Electric Co. has been blamed for negligence. 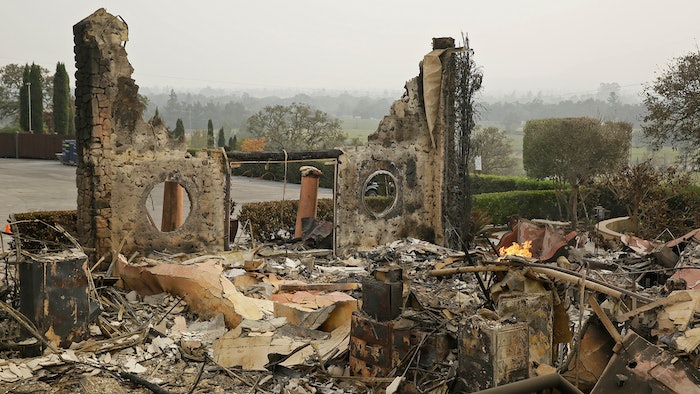 In this Oct. 10, 2017 file photo, the remains of the Signorello Estate winery continue to smolder in Napa, Calif. A month after deadly wildfires swept through California's famed wine country. Lost in the fire was the Napa winery’s signature stone hospitality building. A kitchen, corporate offices, a wine lab and the home of owner Ray Signorello Jr. also were destroyed.
AP Photo/Eric Risberg, File

BURLINGAME, Calif. (AP) — Pacific Gas and Electric Co. was blamed in three lawsuits filed Tuesday for negligence in the wildfires that killed more than 40 people and destroyed over 8,000 homes in Northern California last month.

The lawsuits allege the San Francisco-based utility and its parent PG&E Corp. put profits over safety by failing to trim trees and vegetation around power lines and didn't maintain aging equipment that contributed to the deadly series of wind-driven fires that broke out Oct. 8 and raged across several counties, including the heart of wine country.

The suits were filed on behalf of three couples who lost their homes in the fires, including former San Francisco Mayor Frank Jordan, and a couple hospitalized after surviving the fire by floating in their swimming pool for hours and dunking underwater repeatedly to escape the extreme heat as flames blew around them and destroyed everything they owned.

PG&E spokesman Donald Cutler said the lawsuit was based on assumptions because the investigation into the cause of the fires isn't complete. He also said the company's brush clearance meets or exceeds federal and state requirements and the company inspects power lines at least once a year.

The state Department of Forestry and Fire Prevention has not determined the cause of the fires yet, but said electrical equipment is one potential source. PG&E has said the state is investigating whether its power lines and equipment were a possible cause.

In response to previous suits from the fire, PG&E said in a court filing that a private power line may have sparked the fire that killed 21 people and destroyed more than 4,400 homes in Sonoma County. Another 22 people were killed and at least 4,500 more structures were destroyed in other fires in the region.

Pitre said PG&E had provided no support for its claims that a third-party may have been involved and he criticized the legal filing that garnered a front-page headline in the San Francisco Chronicle.

"We are outraged at the most recent PG&E submission, which captured a headline where PG&E seeks to shift and deflect blame to an unknown person based on unknown facts," Pitre said. "That's not transparency in our view. That's secrecy. And, frankly, we're tired of it."

Pitre said the lawsuits were aimed at getting the utility and state investigators to turn over materials that will pinpoint the cause of the fires.

One of the plaintiff's, Gregory Wilson, who rode out the fire in his Santa Rosa swimming pool, spoke in a whisper as he discussed the frightening ordeal that put him and his wife, Christina, in an intensive care unit for 10 days with smoke inhalation and burns.

"We watched everything burn around us," said Wilson, who hasn't been able to speak in a normal voice since the fire. "It's a nightmare you can't even imagine. ... We're hoping they can shed light on this so no one will ever have to go through this and, hopefully, no one else will have to die."