These costs are expected to rise as devastating storms, floods, wildfires and droughts become more frequent. 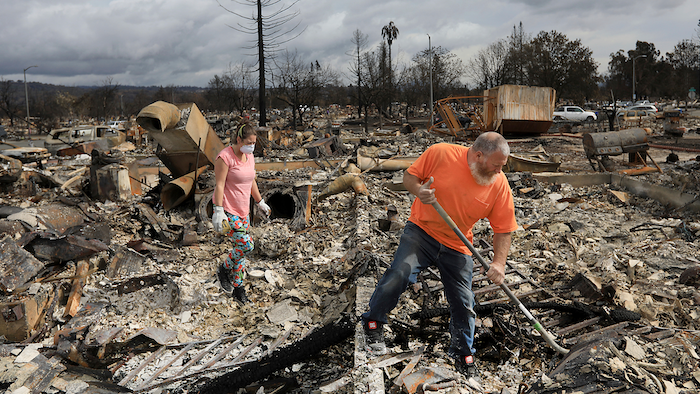 Sarah Boryszewski is helped by her father Gerald Peete as they dig for belongings in the remains of Boryszewski's home in Coffey Park, Friday Oct. 20, 2017 in Santa Rosa, Calif. Northern California residents who fled a wildfire in the dead of night with only minutes to spare returned to their neighborhoods Friday for the first time in nearly two weeks to see if anything was standing.
Kent Porter/The Press Democrat via AP

A Government Accountability Office report released Monday said the federal government has spent more than $350 billion over the last decade on disaster assistance programs and losses from flood and crop insurance. That tally does not include the massive toll from this year's wildfires and three major hurricanes, expected to be among the most costly in the nation's history.

The report predicts these costs will only grow in the future, potentially reaching a budget busting $35 billion a year by 2050. The report says the federal government doesn't effectively plan for these recurring costs, classifying the financial exposure from climate-related costs as "high risk."

GAO undertook the study following a request from Republican Sen. Susan Collins of Maine and Sen. Maria Cantwell of Washington, the ranking Democrat on the Senate Committee on Energy and Natural Resources.

"This nonpartisan GAO report Senator Cantwell and I requested contains astonishing numbers about the consequences of climate change for our economy and for the federal budget in particular," said Collins. "In Maine, our economy is inextricably linked to the environment. We are experiencing a real change in the sea life, which has serious implications for the livelihoods of many people across our state, including those who work in our iconic lobster industry."

The report's authors reviewed 30 government and academic studies examining the national and regional impacts of climate change. They also interviewed 28 experts familiar with the strengths and limitations of the studies, which rely on future projections of climate impacts to estimate likely costs.

The Midwest and Great Plains are susceptible to decreased crop yields, the report said. The West is expected to see increased drought, wildfires and deadly heatwaves.

Advance copies were provided to the White House and the Environmental Protection Agency, which provided no official comments for inclusion in the GAO report.

Requests for comment from The Associated Press also received no response on Monday.

President Donald Trump has called climate change a hoax, announcing his intent to withdraw the United States from the Paris climate accords and revoke Obama-era initiatives to curb greenhouse gas emissions. Trump has also appointed officials such as EPA Administrator Scott Pruitt, Energy Secretary Rick Perry and Interior Secretary Ryan Zinke, all of whom question the scientific consensus that carbon released into the atmosphere from burning fossil fuels is the primary driver of global warming.

Earlier this month Trump nominated Kathleen Hartnett White of Texas to serve as his top environmental adviser at the White House. She has credited the fossil fuel industry with "vastly improved living conditions across the world" and likened the work of mainstream climate scientists to "the dogmatic claims of ideologues and clerics."

White, who works at a conservative think tank that has received funding from fossil-fuel companies, holds academic degrees in East Asian studies and comparative literature.