He was pinned between the forklift and other equipment.

Ruben Guadlaupe Chavira was operating a forklift around 3:00 a.m. when it pinned him up against other equipment and caused fatal injuries.

He was found by another employee, but pronounced dead by by the local coroner's office at the scene.

Chavira had been employed with the company since 2014.

An OSHA investigation is pending. 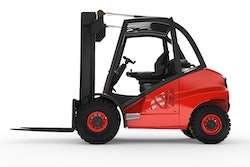