In the 2017 model year, 38 vehicles have won the "Top Safety Pick-Plus" designation, but no all-electric vehicles are on the list. 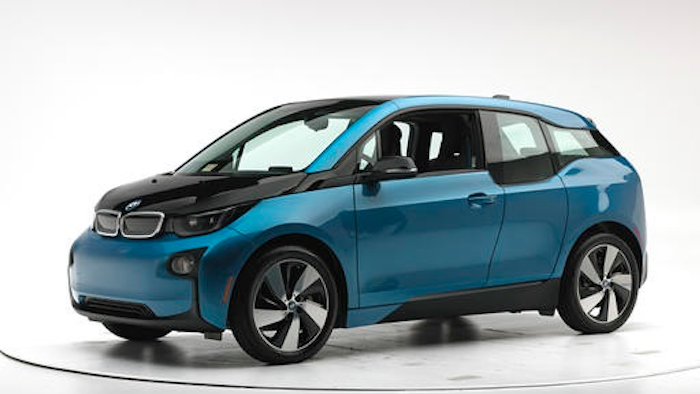 This Sept. 20, 2016, photo provided by the Insurance Institute for Highway Safety shows a 2017 BMW i3 before crash safety testing. The car earned good ratings in four out of five tests, but fell short of getting the highest safety rating in the newest crash tests administered by the insurance industry.
Matt Daly/Insurance Institute for Highway Safety via AP

DETROIT (AP) — Two luxury electric vehicles — the Tesla Model S and the BMW i3 — fell short of getting the highest safety ratings in new crash tests by the insurance industry.

The Insurance Institute for Highway Safety tested 2017 models of both vehicles. Neither earned the institute's "Top Safety Pick" award, which is given to vehicles that get the highest rating in five different crash tests and offer a crash-prevention system with automatic braking. To get a highest "Top Safety Pick-Plus" designation, vehicles must meet all of those criteria and have good headlights.

In the 2017 model year, 38 vehicles have won the "Top Safety Pick-Plus" designation, including two plug-in hybrids: the Toyota Prius Prime and the Chevrolet Volt. But no all-electric vehicles are on the list. The institute hasn't yet tested the all-electric Chevrolet Bolt, which went on sale at the end of 2016.

Tesla's Model S, an all-electric luxury sedan that starts at $72,500, earned good ratings in four of the institute's five tests, including a side impact test and a head restraint test. But it earned a lower rating in a small overlap frontal crash test, which replicates what happens when the front corner of the car collides with a tree or telephone pole at 40 miles per hour. The Tesla's safety belt allowed the crash dummy to move too far forward and it hit its head on the steering wheel.

The institute said Tesla made a production change this month to address the problem, so the car will be tested again. The Model S has earned the highest ratings on U.S. government crash tests, but IIHS performs different tests.

Tesla also earned a "poor" rating for its headlights. And a high-performance version of the Model S, the P100D, got a lower ranking on the roof strength test because its larger battery makes it much heavier, so the roof might not hold up as well in a rollover crash. The government hasn't performed a roof-strength test on the P100D.

The BMW i3, a small electric car that starts at $42,400, also earned good ratings in four out of five tests. It fell short in the head restraint test, which measures how well the car protects against neck injuries in a rear crash. The i3 earned the second-highest rating of "acceptable" for its headlights.

The government hasn't yet reported crash-test results for the i3.