The street collapsed after a six-inch water main broke. 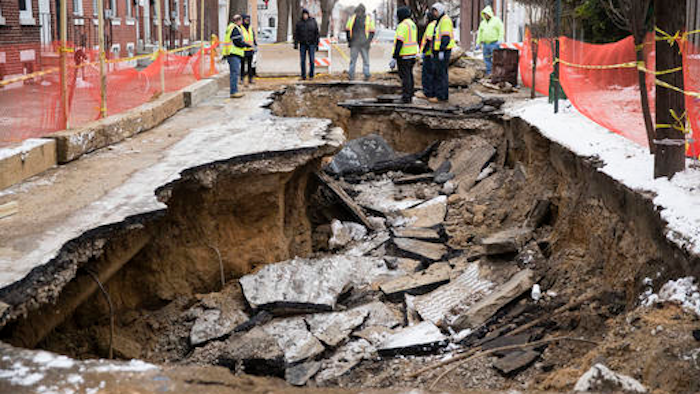 Workers inspect a sinkhole in Philadelphia, Monday, Jan. 9, 2017. The Philadelphia Water Department said a water main break caused the sinkhole to open up on the street.
AP Photo/Matt Rourke

PHILADELPHIA (AP) — The Philadelphia Water Department says a water main break caused a sinkhole to open up on a street in the city's Fishtown section that was large enough to swallow two cars.

A 30 foot-by-10-foot hole developed as a section of East Boston Street collapsed after a six-inch water main broke sometime between 9 a.m. and 10 a.m. Sunday.

The sinkhole absorbed one car and left another teetering on the edge. Twenty homes on the block were left without water. Gas service to six residences was shut off as a precaution.

Water department spokesman John DiGiulio says the street has been blocked off and repairs will begin Monday on what is likely a problem with the sewer in the area.

Bottled water has been provided to all affected residents.