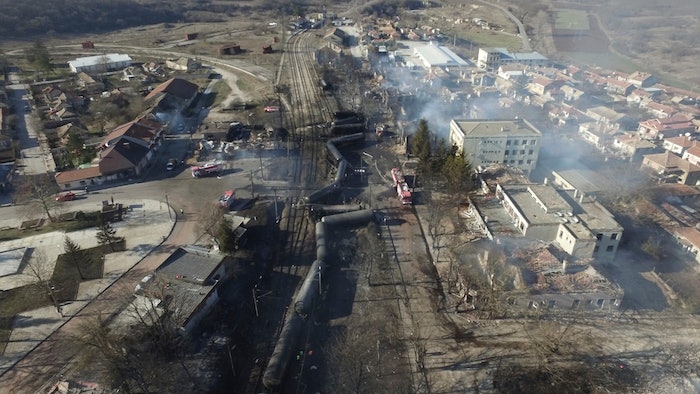 In this aerial view emergency services attend the scene of devastation after a tanker train derailed and a gas tank exploded in the village of Hitrino, northeastern Bulgaria, early Saturday, Dec. 10, 2016.
Petar Petrov / Sky Pictures Bulgaria via AP

Authorities said about 50 buildings in the village of Hitrino were destroyed when containers of gas exploded at 5:40 a.m.

Video footage showed many houses in the village of 800 on fire and ambulances taking the injured to hospitals. Hitrino Mayor Nuridin Ismail told reporters that children had been buried under the rubble of a house that collapsed.

Two tanker cars carrying propane-butane and propylene derailed at the station in Hitrino, hit nearby electric lines and exploded, police officials said. The engine driver survived and has been questioned, police said.

Officials earlier had described the cargo as liquefied natural gas.

The entire village was evacuated later Saturday as a precaution due to the risk of possible new explosions. Emergency teams started a high-risk operation to reload the hazardous substances.

Prime Minister Boiko Borisov, who arrived at the site of the blast, urged citizens to donate blood to address shortages at nearby hospitals.

"There will be more casualties," Borisov told reporters. He said several people suffered more than 90 percent burns and that damage from the explosion was extensive.

The train had been traveling from the Bulgarian Black Sea port city of Burgas to the Danube city of Ruse. The government declared Monday a national day of mourning for the victims of the blast.