It's been a decade since salmonella that made more than 600 people sick was traced to a plant in rural Georgia that manufactured peanut butter for ConAgra. 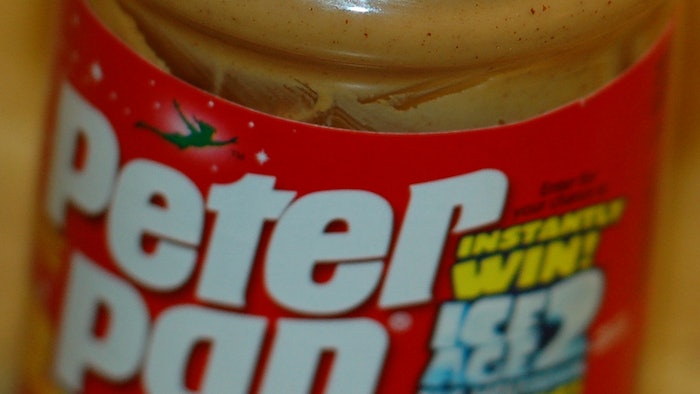 ConAgra launched a huge recall in February 2007, destroying and urging consumers to throw out all of its peanut butter produced since 2004.
Flickr

The case has taken a long time to reach a resolution. It's been a decade since salmonella that made more than 600 people sick was traced to a plant in rural Georgia that manufactured peanut butter for ConAgra. The discovery triggered a massive recall.

It wasn't until last year that the Justice Department disclosed the company would face a criminal charge. That announcement came with new that ConAgra has already reached a plea deal with prosecutors. A U.S. District Court judge has scheduled a hearing Tuesday to decide whether to approve the settlement.

Here are some things to know about the case:

In November 2006, the federal Centers for Disease Control and state health officials began investigating an outbreak of salmonella infections ultimately blamed for sickening at least 625 people in 47 states.

ConAgra officials blamed moisture from a leaky roof and a malfunctioning sprinkler system at the Georgia plant for helping salmonella bacteria grow on raw peanuts.

ConAgra launched a huge recall in February 2007, destroying and urging consumers to throw out all of its peanut butter produced since 2004.

Six months later, in August 2007, ConAgra announced it was ready for Peter Pan to return to supermarkets.

A federal criminal investigation followed the outbreak. More than eight years after the Peter Pan recall, in May 2015, the Justice Department announced charges and a pre-arranged plea deal with ConAgra.

The agreement called for ConAgra Grocery Products Company, a ConAgra subsidiary, to plead guilty to a single misdemeanor charge of shipping adulterated food. No charges were brought against executives of ConAgra, which was based in Omaha, Nebraska, at the time but has since moved its headquarters to Chicago.

ConAgra issued a statement saying the company didn't know its peanut butter was contaminated with salmonella before it was shipped. However, the plea agreement documents note that ConAgra knew peanut butter made in Georgia had twice tested positive for salmonella in 2004. Prosecutors said the company destroyed the tainted peanut butter and identified likely sources of contamination, but ConAgra had not finished fixing those problems by the time of the 2007 outbreak.

ConAgra agreed to settle the case for $11.2 million. That includes an $8 million fine, which the Justice Department called the heftiest criminal fine ever in a U.S. food safety case. The deal also calls for the company to pay $3.2 million in forfeitures to the federal government.

The company still needs to enter a formal plea, which is expected at the hearing Tuesday, and Judge W. Louis Sands must approve the settlement. ConAgra's final tab could get larger if the judge orders payment of additional cash as restitution to victims.

The fine shouldn't hurt ConAgra's bottom line too much. In October, the company reported more than $2.6 billion in sales and net earnings of $186 million during its most recent quarter.