The massive sinkhole cut off power, water and gas supplies to the city. 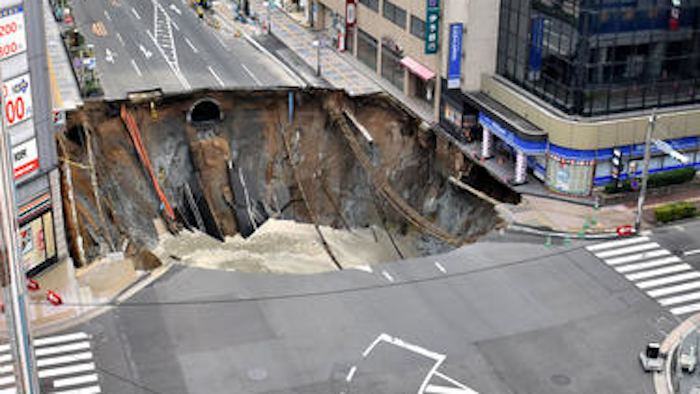 A massive sinkhole is created in the middle of the business district in Fukuoka, southern Japan Tuesday, Nov. 8, 2016. Parts of a main street have collapsed in the city, creating a huge sinkhole and cutting off power, water and gas supplies to parts of the city. Authorities said no injuries were reported from Tuesday's pre-sunrise collapse in downtown Fukuoka.
Kyodo News via AP

TOKYO (AP) — Parts of a main street collapsed in the heart of a major city in southern Japan on Tuesday, creating a massive sinkhole and cutting off power, water and gas supplies to parts of the city (see photos in gallery).

Authorities said no injuries were reported from the pre-sunrise collapse in downtown Fukuoka, which created a sinkhole more than half the size of an Olympic pool in the middle of the business district.

Fukuoka, a city of more than 1.5 million people, is about 1,000 kilometers (620 miles) southwest of Tokyo. The massive cave-in appeared in the city's bustling Hakata district, a major business and entertainment center, with muddy underground water flowing into the hole.

The incident prompted the evacuation of some residents in nearby buildings. Officials were concerned that further erosion inside the sinkhole could prompt nearby structures to collapse.

"An accident like this is unheard of, one that should not have happened," Fukuoka Mayor Soichiro Takashima said. "We must prevent secondary accidents, and will do our utmost to restore important infrastructure."