The measure includes $100 million in grants and loans to replace lead-contaminated pipes in Flint and other cities with lead emergencies. 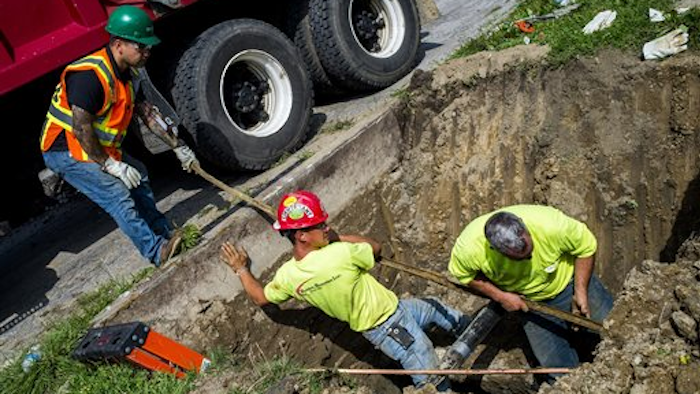 Crews break ground and work to remove and replace lead-tainted pipes from three homes during first day of the second phase under Mayor Karen Weaver's Fast Start program Wednesday, Aug. 31, 2016, in Flint, Mich. The program was launched in March and has replaced infrastructure at over two dozen Flint homes. There are an estimated 250 homes pegged to have service lines replaced during the program's second phase.
Jake May/The Flint Journal-MLive.com via AP

WASHINGTON (AP) — The Senate voted to move forward Monday on a $10 billion water projects bill that includes $220 million in emergency funding for Flint, Michigan, and other communities beset by lead-contaminated water.

Senators advanced the bill 90-1 on a procedural vote, with approval expected later this week.

The bipartisan measure would authorize 29 projects in 18 states for dredging, flood control and other projects overseen by the U.S. Army Corps of Engineers.

The measure includes $100 million in grants and loans to replace lead-contaminated pipes in Flint and other cities with lead emergencies, as well as $70 million toward loans to improve water infrastructure across the country. It also includes $50 million to bolster lead-prevention programs and test water for lead in schools.

Sen. Gary Peters, D-Mich., said lawmakers finally "have a pathway to success" on Flint after months of effort. Senators have twice reached a bipartisan deal to help Flint but were blocked after Republican Sen. Mike Lee of Utah objected.

Flint's drinking water became tainted when the city switched from the Detroit water system and began drawing from the Flint River in April 2014 to save money. The impoverished city was under state control at the time.

Regulators failed to ensure the water was treated properly and lead from aging pipes leached into the water supply. Elevated lead levels have been found in at least 325 people, including 221 children. Lead contamination has been linked to learning disabilities and other problems.

Peters urged his colleagues to support the bill "to show the American people that we can continue to work together to address urgent needs across the country" and "deliver much-needed support to Flint families."

A spokesman said Lee remains opposed to the bill, which he said increases spending without offsetting budget cuts.

Several proposed amendments to the bill are still being negotiated, including one to resolve a dispute over dredging in Long Island Sound that pits Democrats in Connecticut and Rhode Island against Sen. Kirsten Gillibrand, D-N.Y.

The issue involves dredging near a submarine base outside New London, Connecticut, to make room for the U.S. Navy's newest Virginia-class submarines. Gillibrand and other New York officials fear the project could violate the state's stringent water quality standards.

Gillibrand secured language in the water-projects bill aimed at blocking any disposal that violates water quality standards. Sen. Richard Blumenthal, D-Conn., and other lawmakers are trying to block the provision or amend it to apply only to standards in the state where the disposal occurs.

"For the people of Flint, this has taken way too long," Stabenow said in an interview. City residents are still using bottled water nearly a year after officials declared a public health emergency.

Sen. James Inhofe, R-Okla., chairman of the Senate Environment and Public Works Committee, called the water-projects bill crucial, not just for Flint but for the rest of the nation.

The bill includes about $1.9 billion for projects to restore Florida's Everglades and combat algae blooms that have fouled the state's beaches and rivers. Inhofe said in a newspaper column last week that fellow Republican Sen. Marco Rubio of Florida had convinced him to back the project after years of opposition.

If approved by the Senate, the bill would go to the House.

Can Veggies Get Microplastics Out of Our Blood?

What to do with Closed Nuke Plant's Wastewater?