Shrapnel from the broken engine hit the fuselage, leaving a 5" x 16" hole in the outer layer of aluminum above the left wing and causing the plane to lose cabin pressure. 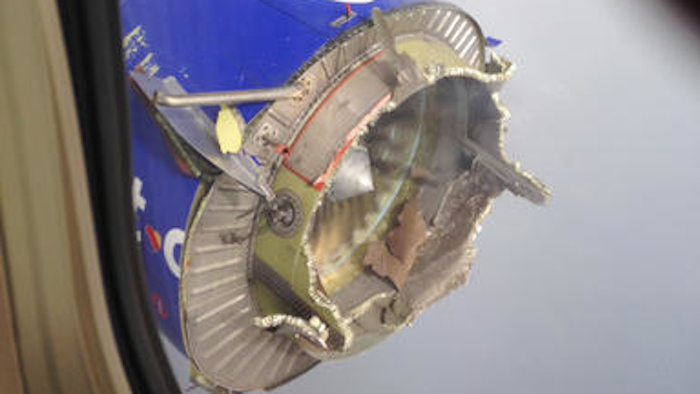 This Saturday, Aug. 27, 2016, file photo shows an engine through a window of a Southwest Airlines flight. The flight from New Orleans bound for Orlando, Fla., diverted to Pensacola, Fla., after the pilot detected something had gone wrong with the engine. On Monday, Sept. 12, the National Transportation Safety Board said that an engine fan blade on the jet broke off and the stub of the blade shows signs of metal fatigue. The plane made a safe emergency landing after shrapnel from the broken engine hit the fuselage.
Jeremy Martin via AP, File

The plane landed safely in Florida after shrapnel from the broken engine hit the fuselage, leaving a 5-inch by 16-inch hole in the outer layer of aluminum above the left wing and causing the plane to lose cabin pressure.

The National Transportation Safety Board released the details in an update Monday to its investigation of the Aug. 27 incident.

In an emailed statement, a spokeswoman for Dallas-based Southwest said the airline was "continuing to work closely with the NTSB on the investigation of this unique and extremely rare event."

The spokeswoman, Lisa Tiller, said repairs have begun on the plane but no date was known for its return to flying. She declined to comment further, saying Southwest would defer to the NTSB to provide more details about the incident.

Investigators said one blade separated from the engine fan disk during the flight. The root of the blade stayed in place, but the rest broke off and was not recovered.

The NTSB said initial laboratory findings indicated that an area of the titanium-alloy blade stub about one inch long and one-fifth of an inch deep showed signs "consistent with fatigue crack growth."

The engine was made by CFM International, a joint venture of GE Aviation and French company Safran Aircraft Engines.

Richard Aboulafia, an analyst at aviation-research firm Teal Group, said advances in materials and manufacturing have made uncontained engine failures extremely rare, and both the Boeing 737 and the CFM engine have good records.

"Given the experience we have had with this aircraft and this engine, the odds of a systemic problem are basically nil," Aboulafia said. He said it's not necessary to inspect every CFM fan blade on all 737s unless the NTSB decides otherwise after completing its investigation.

John Cox, a former airline pilot and now an aviation-safety consultant, said the NTSB will probably focus on how long the fan blade that broke off had been cracked and why Southwest didn't discover metal fatigue during maintenance checks. He said cracks usually start small and grow slowly.

Multi-engine passenger jets like the 737 are designed to fly on one engine, but so-called uncontained engine failures are dangerous because flying debris can damage systems needed to control the plane or penetrate the cabin.

In 2010, shrapnel from an exploding engine on an Airbus A380 operated by Qantas damaged the fuel, hydraulic and electrical systems and caused a brief fire. The crew landed the plane safely in Singapore.

In 1996, a woman and her son were killed when debris from an engine tore through the fuselage while the Delta Air Lines jet was taking off from Pensacola, Florida. The pilots aborted the takeoff.

In last month's incident, the Southwest plane was flying from New Orleans to Orlando with 99 passengers and five crew members but made an emergency landing in Pensacola after losing cabin pressure. No one was injured.

Debris from the left engine hit the fuselage, wing and tail. NTSB investigators said that although they found a gash in the fuselage skin above the left wing, no engine parts were found in the hole, and the interior passenger compartment was not breached.

The NTSB said it was reviewing maintenance records for the plane. The investigators were being assisted by French aviation authorities.