Accident-prone railroad tank cars used to haul crude oil and ethanol could remain in service for another 15 years under federal rules that allow companies to phase in fleet upgrades. 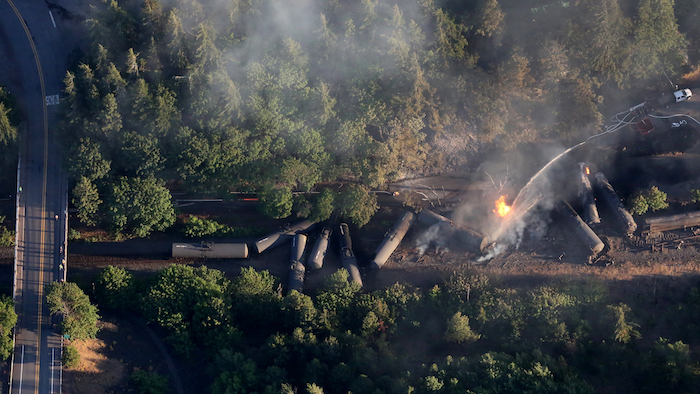 FILE - In this June 3, 2016, file photo, an oil train burns near the town of Mosier, Ore., after derailing. U.S. safety officials say they've seen slow progress in efforts to upgrade or replace tens of thousands of rupture-prone rail cars used to transport oil and ethanol.
Alan Berner (The Seattle Times via AP)

BILLINGS, Mont. (AP) — Accident-prone tank cars used to haul crude oil and ethanol by rail could remain in service for another 15 years under federal rules that allow companies to phase in upgrades to the aging fleet, according to the U.S. National Transportation Safety Board.

Transportation officials and railroad representatives have touted the rules as a key piece of their efforts to stave off future disasters, following a string of fiery derailments and major spills that raised concerns about the crude-by-rail industry.

Yet without mandatory, periodic benchmarks for meeting the requirements, the decision to upgrade to safer tank car designs "is left entirely to tank car fleet owners, and may be driven by market factor influences, not safety improvements," NTSB Chairman Christopher Hart said in a letter Tuesday to the U.S. Department of Transportation's Pipeline and Hazardous Materials Safety Administration.

Tom Simpson with the Railway Supply Institute, which represents tank car manufacturers and owners, said the industry is committed to putting stronger cars in place. Members of the group will meet deadlines for replacing or upgrading the cars, he said, noting that demand for rail cars has eased after crude-by-rail shipments decreased over the past two years in response to lower oil prices.

"The need to modify or install new cars isn't as urgent as when the rule was issued," Simpson said. In recent years, accidents involving the older cars have occurred in Oregon, Montana, North Dakota, Illinois, West Virginia and Canada.

The most notable was in Lac-Megantic, Quebec, where 47 people were killed when a runaway oil train derailed in 2013. During the most recent accident last month in Oregon, 42,000 gallons of crude oil spilled, sparking a massive fire that burned for 14 hours near the small town of Mosier in the Columbia River Gorge.

Cars built before the rule was enacted do not have to be fully replaced until 2029, although most would have to come off the tracks sooner. Just over 10,300 stronger tank cars mandated by the new rules are available for service, according to figures obtained by The Associated Press from the Association of American Railroads.

That's equivalent to roughly 20 percent of the 51,500 tank cars used to haul crude and ethanol during the first quarter of 2016.

Transportation Department Press Secretary Clark Pettig said in response to the NTSB's criticism that the schedule to retrofit older cars was locked in by Congress in a transportation bill approved last year. The Congressional deadline represents "the absolute last moment" to meet the new standards, Pettig said.

"We agree with NTSB that industry should work to beat those deadlines," he said.

A Wednesday meeting was planned in Washington, D.C., where government and industry officials were set to update the safety board on progress addressing the issue. Safety board member Robert Sumwalt told the Associated Press that federal regulators need to set milestones to hold the industry accountable.

"There's been 28 accidents over the past 10 years. That's almost three accidents a year," Sumwalt said. "Unfortunately, history shows we probably will have more accidents involving flammable liquids." A bill from U.S. Sen. Ron Wyden of Oregon and other Democratic lawmakers would offer tax credits for companies that upgrade their cars during the next several years.

"Communities near train tracks, like Mosier, Oregon, must be confident that companies are using the safest tank cars possible," Wyden said.

The railroad association said only 700 of the least resilient model of the older-style tank cars remain in service. Most of the cars in current use have at least some improvements, such as shields at either end of the car to help prevent punctures during derailments.

Transportation officials cautioned, however, that thousands of idled "legacy cars" could quickly come back online if oil prices rise and shipment volumes rebound. Most tank cars are owned or leased by companies that ship fuel by rail, not the railroads themselves.