Children can develop learning disabilities and behavior problems from lead exposure, even in low levels. 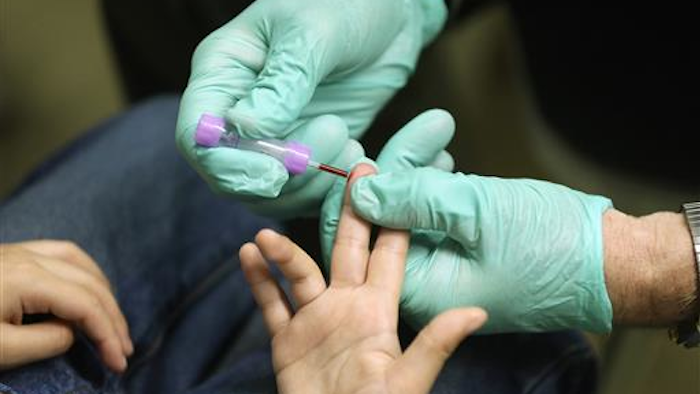 In this Jan. 26, 2016 file photo, registered nurse Brian Jones draws a blood sample from a student at Eisenhower Elementary School in Flint, Mich. The students were being tested for lead after the metal was found in the city's drinking water. Blood-lead levels in Flint children under the age of 6 were significantly higher after the city switched its water in 2014 in a cost-saving move, according to report released Friday, June 24, 2016, by U.S. disease experts.
AP Photo/Carlos Osorio, File

DETROIT (AP) — Flint children under the age of 6 had significantly higher blood-lead levels after the city switched its water source in 2014 to save money, according to a report released Friday by U.S. disease experts.

The Centers for Disease Control and Prevention's report said the likelihood a child would have a concerning blood-lead level — at least 5 micrograms of lead per deciliter of blood — was about 50 percent higher after the April 2014 switch from Detroit's water system to the Flint River.

Flint used the water for 18 months, during which lead leached from old pipes in homes, businesses and schools because the water wasn't treated to control corrosion. The city switched back to Detroit's system in October.

"This crisis was entirely preventable, and a startling reminder of the critical need to eliminate all sources of lead from our children's environment," Patrick Breysse, director of CDC's National Center for Environmental Health, said in a statement.

About 9,600 children younger than 6 years old lived in homes served by Flint's water system, the report said. Among them, about 7,300 received nearly 9,700 blood lead tests before, during and after the water source switch.

Children can develop learning disabilities and behavior problems from lead exposure, even in low levels.

According to the CDC, blood-lead testing in Michigan is targeted toward children at or below the poverty level and those enrolled in Medicaid. All children on Medicaid are required to receive blood-lead screenings when they're 1 and 2 years old, or 3 and 6 years old if previous screenings weren't done.

The lead-level test periods were: the year leading up to the initial switch; between April 2014 and the January 2015 release of a water advisory because of high levels of disinfectant byproducts; between the advisory and return to Detroit water; and after the return to Detroit.

After last fall, children's blood-lead levels dropped to what had been found before the switch to the Flint River.

The study underscores the need for a "big, public health discussion" about lead, Breysse told The Associated Press. A recent national health survey estimated that a half-million children under 6 have elevated blood-lead levels in the area of concern and 4 million U.S. households have lead-paint hazards.

"We have concerns being raised across the country," he said.

Officials noted some limitations with the Flint findings: They couldn't account for all factors that might have contributed to a child's lead exposure, such as whether lead-based paint was present in the children's homes or whether a decline in blood-lead levels post-return to Detroit water was at least partly because of the increased consumption of bottled water.

Marc Edwards, an environmental engineering expert at Virginia Tech who helped uncover the lead scandal, said the study corroborates his work and that of Flint pediatrician Dr. Mona Hanna-Attisha.

"It's a solid report confirming the veracity of our warnings of adverse health effects from water lead exposure in Flint (in) August 2015, as well as Dr. Mona's studies of elevated blood lead in September," he wrote in an email to the AP.

The report comes a day after federal officials announced filtered tap water was safe for everyone in Flint, lifting a recommendation that pregnant women, nursing mothers and children under 6 drink bottled water to avoid lead exposure. The announcement was based on tests of filters that have been distributed for months for free by the state of Michigan.

In March, a state task force that investigated the Flint crisis concluded that it was a "case of environmental injustice" in a poor, majority black city.