The Global Impact of Chemical Munitions Dumped at Sea

Today, chemical warfare agents are destroyed via neutralization or incineration, but they used to just dump them in the sea. 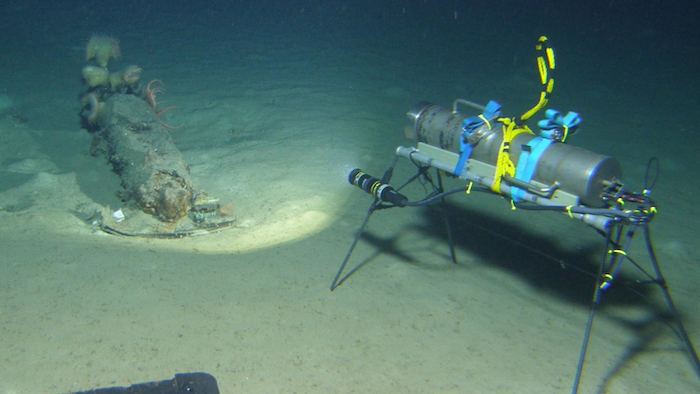 A special issue of the academic journal Deep-sea Research II, published recently, is devoted to expanding understanding of the global issue of chemical munitions dumped at sea.

The publication was edited by Margo Edwards, interim director of the University of Hawai'i at Mānoa's (UHM) Hawai'i Institute of Geophysics and Planetology, and Jacek Beldowski, Science for Peace and Security MODUM ("Towards the Monitoring of Dumped Munitions Threat") project director at the Polish Academy of Sciences--two international leaders in the assessment of sea-dumped military munitions and chemical warfare; and the effects on the ocean environment and those who use it.

"The overarching objective of the special issue of Deep Sea Research II is to collate and compare results from two of the most comprehensive studies of sea dumped chemical munitions to promote data sharing and constrain the factors that influence where and how to mitigate the damage," said Edwards.

Whereas today chemical warfare agents (CWA) are destroyed via chemical neutralization processes or high-temperature incineration, the internationally accepted practice in the early to middle 20th century was sea disposal of excess, obsolete or unserviceable munitions, including chemical warfare materiel.

In 1970, the U.S. Department of Defense discontinued this practice and in 1972 an international treaty, the Convention on the Prevention of Marine Pollution by Dumping of Wastes and Other Matter, was developed to protect the marine environment. By the time this treaty, referred to as the London Convention, was signed by a majority of nations, millions of tons of munitions were known to have been disposed throughout the world's oceans.

Since 2007, the Hawai'i Undersea Military Munitions Assessment (HUMMA) has been assessing sea-disposed military munitions in a region south of the island of Oahu, Hawai'i. Scientists at UHM and Environet and members of the U.S. Army collaborated to assess the condition of munitions casings; effects on seafloor ecosystems; and the presence of metals and CWA in sediments and shrimp.

The results of those studies, published in the current issue of Deep Sea Research II, document that the forty munitions examined in detail in the HUMMA field area pose little, if any, risk to human health while simultaneously recognizing that these forty are only a subset of the hundreds of likely chemical munitions in the area.

Illustrative of the mystery of the vast ocean, the HUMMA project enabled discovery of a new species of sea star, Brisingenes margoae nov. sp.--named in honor of Edwards.

This unique species and other sea stars were collected using the School of Ocean and Earth Science and Technology's Hawai'i Undersea Research Laboratory submersibles.

The Chemical Munitions Search and Assessment (CHEMSEA) was conducted in the Baltic Sea from 2011 until 2014. In combination, the studies from CHEMSEA published in Deep Sea Research II recognize sea-dumped munitions as a point source of pollution in the Baltic Sea, although its contribution appears to be low and limited to deep, anoxic basins.

Acute toxicity to humans from CWA (e.g., mustard, Adamsite) is unlikely given recorded concentrations, although adverse effects of chronic exposure on fish populations cannot be excluded.

The collected articles from the CHEMSEA and HUMMA projects projects in the special issue of Deep-sea Research II present a number of techniques that are useful for the complex in-depth investigation of munitions dumpsites.

Results show that sea-dumped munitions in both project areas do not represent direct risk for humans except in cases of exposure due to recovery, although in the more confined Baltic Sea with limited water exchange, munitions can have adverse impact on the ecosystem.