Those who knew the 39-year-old professor said he was kind and patient, and that there was no indication he had a conflict with anyone. 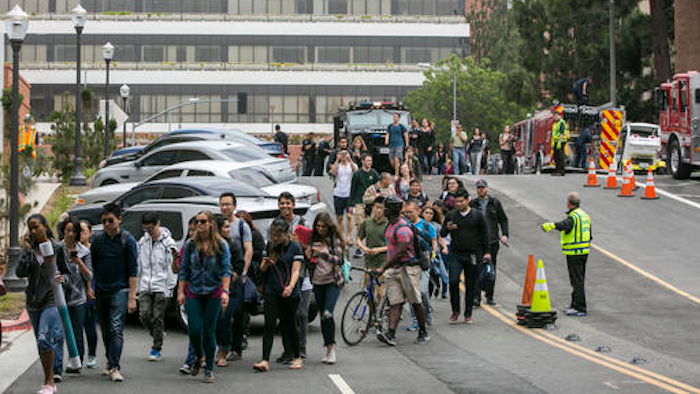 People are evacuated by Los Angeles Police officers from the UCLA campus near the scene of a fatal shooting at the University of California, Los Angeles, Wednesday, June 1, 2016, in Los Angeles. Los Angeles police chief says shooting at UCLA was murder-suicide.
AP Photo/Damian Dovarganes

LOS ANGELES (AP) — The victim of a murder-suicide that locked down the UCLA campus for hours was a mechanical engineering professor who was married with two children, according to authorities and friends.

A law enforcement official who spoke on condition of anonymity because the official was not authorized to speak publicly about the case identified the victim as William Klug.

The shooter in Wednesday's violence has not been named.

Those who knew the 39-year-old Klug said he was kind and patient, and that there was no indication he had a conflict with anyone.

He said Klug coached his 10-year-old son's team and spent countless hours on the field with the boys and girls in the league.

"Today there's a hole in the heart of El Segundo Little League," Gianusso said. "They really can't believe it because Bill was one of the kindest, most light-hearted, quiet person that you'd ever meet. Just a great nice guy all around and to meet his death in such a tragic and horrific manner, is just shocking and unbelievable."

Gianusso said Klug had a younger daughter but did not know her age.

He said he can't imagine Klug having any problems with anyone after watching him interact with the children in the league. "I just can't wrap my head around that," he said.

Charles Knobler, a biology and chemistry professor at UCLA who said he knew Klug for 10 years, said he last saw Klug for lunch last week.

"I just can't believe it," Knobler said. "I never, ever thought Bill Klug would have been the person who was involved. It's beyond belief that someone did this.

Jim Gimzewski, another colleague at UCLA, was in tears talking about Klug, who he said was "kind, gentle soul with a brilliant mind."

"He's such a young professor. He was just very kind and respectful," Gimzewski said. "I could never have guessed that this would happen to him. It's just so tragic."

Klug was working in the complex and intricate study of computational biomechanics. He and his collaborators worked on developing computer models to study such things as the protein shells of viruses and the contraction of the human heart.

Some viruses, for instance, change shape as they mature and become infectious.

"He was trying to discover how that happened," said Alex Levine, a physics and biochemistry professor who collaborated with Klug and was his friend for a decade.

"I was shocked and I'm still shocked. I'm devastated to lose a friend and a colleague," Levine said.

Klug also was an avid surfer and had a strong Christian faith, colleagues said.

Renjie Li, a 21-year-old mechanical engineering junior at UCLA, said Klug was one of his favorite professors.

"He was smart, very patient," Li said. "When I took his class last year, I always went to his office hours and asked a bunch of questions, and he always answered with passion. He's very approachable."

Just last month, he said Klug agreed to write a recommendation letter for his application to grad school.