The financially struggling city of roughly 100,000 people remains under a state of emergency. 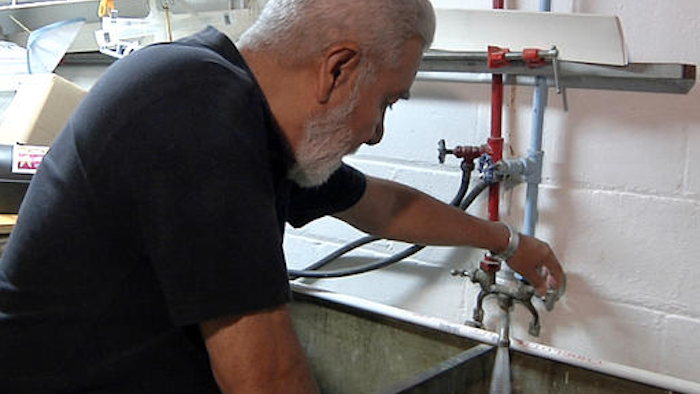 This Tuesday, May 24, 2016, image taken from video shows David G. Mata Sr. turning on the faucet in the basement of his home in Flint, Mich. State and local officials are asking Flint residents to flush the pipes in their homes every day for two weeks. Some residents like Mata are giving it a shot, but not all believe the effort will have its intended effect of helping to remove lead particles and coat the pipes.
AP Photo/Mike Householder

FLINT, Mich. (AP) — Replacing water pipes due to the lead-tainted crisis in Flint could be at least twice the price of previous estimates, according to a report obtained by a newspaper.

Engineering company Rowe Professional Services told the state the average cost for replacing a service water line through a completed pilot project was $7,500. The Michigan Department of Environmental Quality previously estimated it would cost $4,000, the Detroit Free Press reported Saturday.

The company's report said costs could be higher if average permit fees of $2,400 per site are factored in. The largest share of that is $2,200, which includes replacing the pavement.

The report notes other concerns arising during the pilot project, including lead-contaminated soil that needs to be properly handled and disposed.

The city already received $2 million from the state to replace about 500 lines. The state has authorized roughly $70 million in funds for the emergency, and Snyder is seeking $165 million more through the budget process.

Still, higher costs could hamper negotiations among lawmakers as they deal with lower-than-expected tax revenue and enact a new state budget with less overall spending than initially proposed.

So far, 30 lead or galvanized service pipes have been replaced as part of the pilot project. Weaver said the city soon will issue requests for proposals to complete the next phase of the Fast Start pipe-replacement program.

Officials' decision to not apply corrosion control allowed water to scrape lead from the pipes after the city switched its water supply from Detroit's municipal system to the Flint River in 2014 to cut costs. That resulted in the contamination of the water supply, elevated blood lead levels for some people in the city and may have contributed to the deaths of at least 12 people from Legionnaires' disease.

The financially struggling city of roughly 100,000 people remains under a state of emergency as local, state and federal officials try to deal with the problem.

The NHTSA received 22 complaints and two field reports of engines stalling due to high-pressure fuel pumps failing.
Oct 18th, 2021
Follow Us
Most Recent