The UAW was elected to represent workers specializing in the maintenance and repair of robots and machinery at the factory. 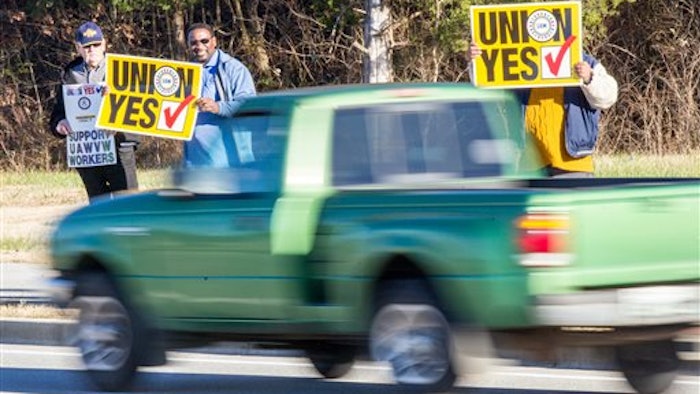 In this Dec. 4, 2015 file photo, union supporters hold up signs near the Volkswagen plant in Chattanooga, Tenn. Volkswagen announced on Monday, April 25, 2016, that it plans to appeal a National Labor Relations Board decision upholding a union vote by skilled-trades workers at the plant.
AP Photo/Erik Schelzig, file

NASHVILLE, Tenn. (AP) — The National Labor Relations Board is bringing an unfair labor practices complaint against Volkswagen for the German automaker's refusal to bargain with the United Auto Workers union at its lone U.S. assembly plant in Tennessee.

The UAW was elected to represent workers specializing in the maintenance and repair of robots and machinery at the Chattanooga factory on a 108-44 vote in December.

But Volkswagen declined to engage in contract talks with the UAW while challenging an NLRB decision to allow the small group of workers to vote on unionization.

The federal labor panel earlier this month rejected Volkswagen's challenge in a 2-1 ruling that found skilled-trades workers "share a community of interest" that is distinct from the remaining 1,400 hourly production workers in the assembly, body weld and paint shops.