The blast forced evacuations of nearby areas as it sent a toxin-filled cloud billowing into the air and injuring more than 100 workers. 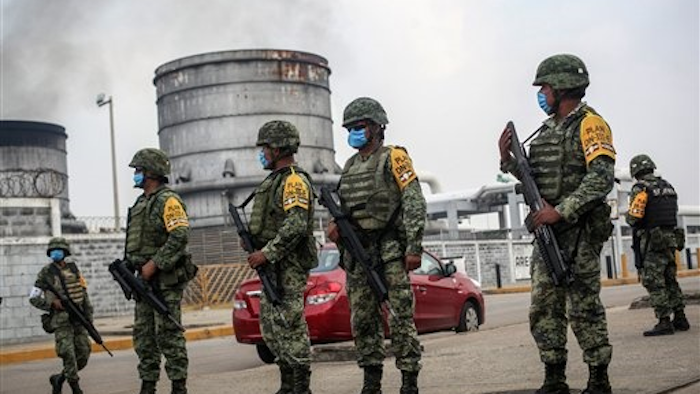 Mexican army soldiers wearing protective face masks stand guard at an entrance of the Pajaritos petrochemical complex in Coatzacoalcos, Mexico, Thursday, April, 21, 2016. At least 13 people are now confirmed dead and scores of others were injured in a Wednesday afternoon explosion inside the plant. The state oil company Petroleos Mexicanos, or Pemex, said the plant, operated by Mexichem, in partnership with Pemex, produces vinyl chloride, a hazardous industrial chemical.
AP Photo/Felix Marquez

Pemex raised the toll late Thursday from the 13 fatalities previously known and said eight workers remained missing. It also said 19 people remained hospitalized, with 13 of them in serious condition.

In a statement, the company said 12 of the bodies had been identified and eight of them delivered to family members.

Earlier in the day, President Enrique Pena Nieto toured the facility in the industrial port city of Coatzacoalcos and met with relatives desperate for word on the fate of loved ones still unaccounted for.

"I understand the anxiety, the worry, the anguish you are going through," Pena Nieto said, assuring them that both Pemex and the Mexichem company, which co-operated the plant, would fulfill their responsibilities and compensate those hurt by the accident.

About 30 families gathered at a plant entrance road, where a sharp chemical smell still hung in the air about 2 kilometers (a mile) from where the explosion occurred Wednesday afternoon. Many wore facemasks to ward off the pungent odor.

Shoving broke out as people unsuccessfully tried to force their way into the installation. Some shouted at marines and soldiers who were called in to guard the facility, and they threw rocks at a white government SUV when it arrived at the scene.

Rosa Villalobos traveled about four hours by bus from the city of Veracruz to scour Coatzacoalcos hospitals looking for her son, Luis Alfonso Ruiz Villalobos, a 25-year-old worker at the plant. When she couldn't find him she showed up at the plant entrance.

Some volunteers brought food and drink to the families. After a while authorities began taking people inside in small groups to see a list of those confirmed dead. Some left crying after seeing their loved ones' names.

Pemex said Thursday night that it was prioritizing the safety of those inspecting the plant and teams were still gradually gaining access to more parts of the site.

The blast forced evacuations of nearby areas as it sent a toxin-filled cloud billowing into the air and injuring more than 100 workers.

Jose Antonio Gonzalez Anaya, Pemex's director, told Radio Formula that the explosion was caused by a leak of an as-yet unknown origin.

Antonio Mariche, who accompanied the Villalobos family in search of Luis Alfonso, vowed that the families would demand a full account of what happened.

"To the president, to the state governor, to the head of Pemex, we will not allow any more cover-ups like have happened with previous accidents," Mariche said. "They have covered up the numbers (in the past); there have been people who disappeared and regrettably never appeared. ... We will go to the last consequences to make sure this doesn't keep happening."

In early February, a fire killed a worker at the same facility.