The FDA proposed a new voluntary limit for the amount of inorganic arsenic — the type found in some pesticides and insecticides — in infant rice cereals. 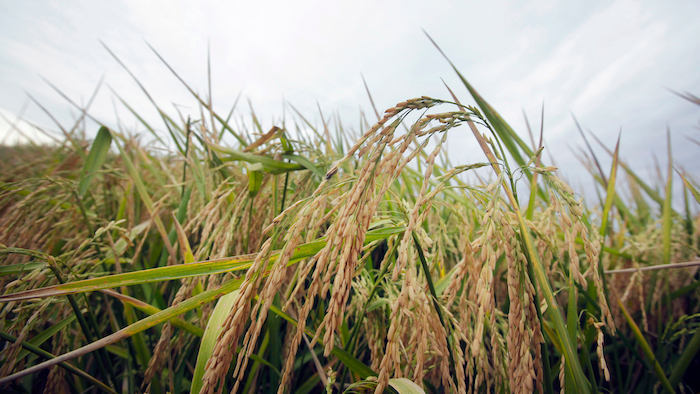 This file photo shows rice growing in a field near Alicia, Arkansas. The FDA is urging the food industry to reduce the already-small amount of arsenic found in baby rice cereals.
AP Photo/Danny Johnston

WASHINGTON (AP) — The Food and Drug Administration on Friday urged the food industry to reduce the already tiny amount of arsenic found in baby rice cereals.

The agency proposed a new voluntary limit for the amount of inorganic arsenic — the type found in some pesticides and insecticides — in infant rice cereals to 100 parts per billion, similar to recommendations already in place in Europe. It's a very small amount, and about half of infant rice cereals the FDA sampled from retail stores in 2014 are already in compliance. But the FDA says rice cereal is a leading source of arsenic exposure in infants and high doses could be dangerous.

"The proposed limit is a prudent and achievable step," said Susan Mayne of the FDA's Center for Food Safety and Applied Nutrition.

The FDA said parents don't need to stop feeding their infants rice cereal, but officials said they should vary rice with other things like baby oatmeal, barley and multigrain cereals that are also iron-fortified. The agency said rice intake is about three times greater for infants than adults relative to body weight, primarily due to infant rice cereal.

Gerber, the nation's largest manufacturer of baby rice cereal, says it's already in compliance with the FDA's proposed arsenic levels.

"We have worked closely with our trusted rice supplier and their growers as well as researchers from agricultural universities to achieve some of the lowest levels of this element in U.S. grown rice," Gerber said in a release issued shortly after the agency's announcement.

Arsenic is naturally present in water, air, food and soil in two forms: organic and inorganic. Organic arsenic passes through the body quickly and is less toxic. But inorganic arsenic may pose a cancer risk if consumed at high levels or over a long period of time. Rice is thought to have arsenic in higher levels than most other foods because it is grown in water on the ground, optimal conditions for the contaminant to be absorbed.

To get an idea of the FDA's proposed limit, 100 parts per billion equals about one grain of rice in more than 344 pounds of long-grain white rice. But the agency said it's not just the amount that's important, but the exposure and the toxicity.

The FDA said its data show that about 47 percent of infant cereals sampled met the standard, and 78 percent were at or below 110 parts per billion.

The rice industry has worked in recent years to find ways to reduce arsenic in its product. But that has often proved difficult, since rice growers don't tend to use arsenical pesticides and they aren't always sure how to get it out of their soil. Levels of inorganic arsenic may be left over from crops that were previously farmed on the same fields, or come from drift or runoff.

The advocacy group Consumers Union has been pushing the FDA for several years to set standards for arsenic in certain foods. Urvashi Rangan of Consumers Union says the group is happy with the FDA's move, but more needs to be done. The group is particularly concerned about levels of arsenic in rice-based cereals and rice beverages consumed by older children.

"It's important that FDA has acknowledged the risk today, but we think it needs to apply a much broader population," Rangan said.

The American Academy of Pediatrics also praised the proposed guidelines, and noted that parents don't have to give rice cereal to babies as their first food, as some have traditionally thought.

"Rice cereal fortified with iron is a good source of nutrients, but it shouldn't be the only source, and does not need to be the first source," said Dr. Benard Dreyer, the group's president.