He had taken off his hard hat and had not been wearing a safety harness because it wasn't required for the bottom floors he'd been working on. 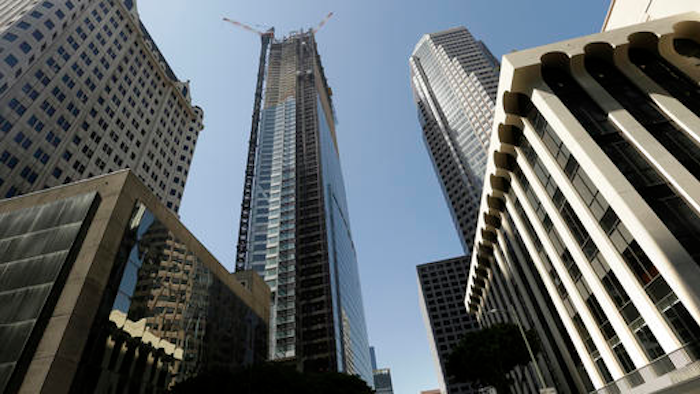 A fire department spokesperson said the the construction worker plunged 50 stories to his death from the building under construction and hit the back of a passing car in downtown Los Angeles.
AP Photo/Nick Ut

Authorities are investigating whether an electrician intentionally leaped to his death from the 53rd floor of Los Angeles' tallest skyscraper onto an intersection humming with a normal weekday's bustle, the coroner said Friday.

The coroner is also investigating the possibility of Thursday's death being a workplace accident, because it happened at a construction site, said Ed Winter, assistant chief Los Angeles County Coroner. But police and officials for Turner Construction, the main contractor on the unfinished 73-story Wilshire Grand Center, interviewed workers and said the fall appeared to be a suicide.

Winter said as far as he knew, there was no note.

It took some time for people below to realize the horror of what had happened, said Los Angeles Times photographer Mel Melcon, who was on assignment at the building.

"No one thought it was a body," Melcon told his paper. "We heard no screams."

The man was identified as Joseph Sabbatino, 36, of Palmdale, Winter said. An autopsy was pending.

He had taken off his hard hat and had not been wearing a safety harness because it wasn't required for the bottom floors he'd been working on, said Lisa Gritzner, spokeswoman for Turner Construction.

"We have confirmed with (California's Division of Occupational Safety and Health and Los Angeles police) that the incident which occurred at the Wilshire Grand project site on March 17 was not work-related," a statement issued by Turner Construction read.

Work was shut down Friday and counselors would be on hand for employees, the statement said.

Winter said the man, a new employee on his second day on the job, died instantly. The investigation will continue.

A car he struck appeared to be undamaged, but a rear side panel was splattered with blood, officials said.

James Armstrong III was walking to a nearby bank just after the fall when he saw police helping the driver.

"She was hysterical," waving her hands in the air and holding her head, he said. But she did not seem to be hurt, Armstrong said.

The woman was taken to a hospital to be examined, fire officials said.

The 73-story skyscraper, the tallest on the West Coast, will be about 1,100 feet tall, or nearly a quarter-mile, when it's completed. A ceremony was held earlier this month when the top beam was hoisted into place on the 73rd floor. The $1 billion office and hotel tower being developed by Korean Airlines Co. Ltd. is expected to open in early 2017.

The building is near the Staples Center arena where the NBA's Los Angeles Lakers and Clippers play and is at the center of the bustling and fast-growing financial district of downtown.

There were barricades around the building and other safety measures in place, said Chris Martin, CEO of Martin Project Management, which is overseeing the building.

All of the building's 891 workers had undergone training, Martin said.

"There's safety training for every worker on the job, and certain locations there's very specialized training. So these are all smart people," Martin said. "We had no injuries up to this date."

Gritzner said the company had found all safety protocols were followed.

Electrician Falls Off of Skyscraper, More Than 50 Floors

Police arrested a 26-year-old suspect who was familiar with the victim.
Feb 19th, 2021
Follow Us
Most Recent