The decision reflects Japan's divisive views on nuclear safety and leaves only two of the country's 43 reactors in operation. 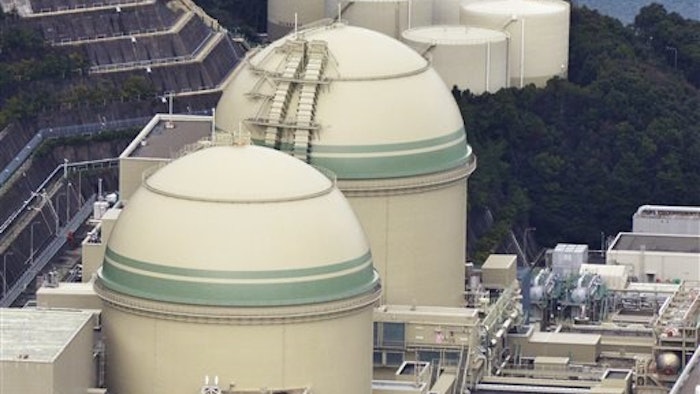 apan's Otsu District Court on Wednesday, March 9, 2016, ordered Kansai Electric Power Co. to shut down No. 3 reactor and keep the No. 4 offline at the plant. The two reactors restarted this year after a high court in December reversed an earlier injunction by another court.
Kyodo News via AP, File

TOKYO (AP) — A court issued an unprecedented order Wednesday for a nuclear reactor near Kyoto to stop operating and ordered a second one to stay offline.

The Otsu District Court, which issued the injunction, said the emergency response plans and equipment designs at the two reactors have not been sufficiently upgraded after the 2011 Fukushima nuclear disaster.

The order requires Kansai Electric Power Co. to shut down the No. 3 reactor and keep the No. 4 unit offline at the Takahama plant in Fukui prefecture in western Japan, home to about a dozen reactors.

The two reactors restarted this year after a high court in December reversed an earlier injunction by another court. The No. 3 reactor, which uses a riskier plutonium-based MOX fuel, resumed operation in late January, while the No. 4 reactor had to be shut down late last month after operating for just three days because of a series of technical problems.

Kansai Electric said it would abide by the decision and start the shutdown procedures for the No. 3 reactor Thursday morning. The utility, meanwhile, said that the decision was "disappointing" and that it planned to appeal.

The decision reflects Japan's divisive views on nuclear safety and leaves only two of the country's 43 reactors in operation.

The Takahama plant has been a major concern for the region. Residents say a major accident at the plant, which sits right next to Kyoto, a major tourist destination, would destroy tourism. They also worry about radiation impact on nearby Lake Biwa, a key source of drinking water for western Japan.

Judge Yoshihiko Yamamoto said the operator has not fully explained exactly how it has upgraded safety features at the two Takahama reactors under the post-Fukushima safety standards. The utility has not fully explained its design philosophy, its measures to mitigate power loss or how to carry out evacuation plans in case of a severe accident and a massive tsunami, he said in the ruling.

The decision also shakes the credibility of the stricter safety requirements installed following the Fukushima disaster. Wednesday's ruling supported concerns by residents and experts that the stricter standards still do not require utilities to have adequate evacuation plans before applying to restart reactors.

Nuclear Regulation Authority Chairman Shunichi Tanaka said he could not immediately comment on how the ruling would affect the regulatory activity, but defended the new requirements, which incorporated lessons learned from the Fukushima disaster.

Lawyers for the plaintiffs welcomed the ruling as "fair, calm and wise," raising questions over the utility's safety culture and the regulators' safety standards. They urged the nuclear authority to amend the safety requirements per Wednesday's ruling.

Chief Cabinet Secretary Yoshihide Suga told reporters that the government stands by the regulators' standards and that plans to restart Takahama and other reactors deemed safe are unchanged.

Prime Minister Shinzo Abe's government wants to restart as many reactors as possible. It says nuclear energy should remain a key power source for Japan, which has few natural resources to fuel its economy.