Some say that solar is being slowed by supply chain problems due to an ongoing inquiry into possible trade violations. 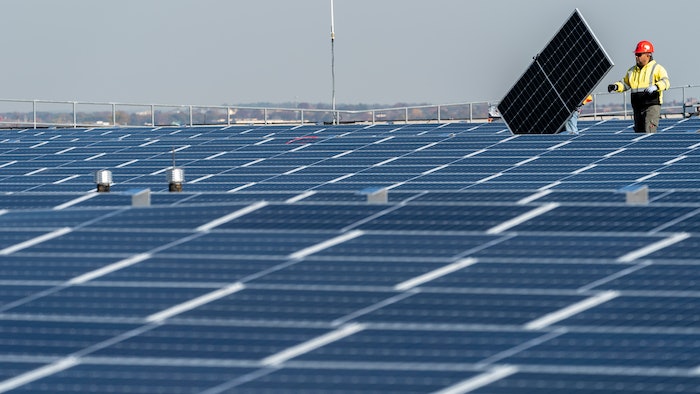 WASHINGTON (AP) — President Joe Biden plans to invoke the Defense Production Act to increase U.S. manufacturing of solar panels while declaring a two-year tariff exemption on panels from Southeast Asia. He's attempting to jumpstart an industry key to his climate change-fighting goals that advocates say has been disrupted by a federal investigation.

The White House announced Monday that the moves will be implemented using executive actions and presidential proclamations. They follow months of complaints by industry groups, which argue that the solar sector is being slowed by supply chain problems due to an ongoing Commerce Department inquiry into possible trade violations involving Chinese products.

The Commerce Department announced in March that it was scrutinizing imports of solar panels from Thailand, Vietnam, Malaysia and Cambodia, concerned that products from those countries are skirting U.S. anti-dumping rules that limit imports from China.

The Commerce Department has defended its investigation. Secretary Gina Raimondo told a Senate panel in May that the solar inquiry is following a process set by law that doesn’t allow consideration of climate change, supply chains or other factors.

Still, clean energy leaders have been warning since then that the investigation — which could result in retroactive tariffs of up to 240% — would severely hinder the U.S. solar industry, leading to thousands of layoffs and imperiling up to 80% of planned solar projects around the country. That could jeopardize one of Biden’s top clean energy goals and run counter to his Democratic administration’s push for renewable energy such as wind and solar power.

“Today’s actions protect existing solar jobs, will lead to increased employment in the solar industry and foster a robust solar manufacturing base here at home,” Ross Hopper said in a statement Monday.

The Defense Production Act lets the federal government direct manufacturing production for national defense and has become a tool used more commonly by presidents in recent months. President Donald Trump's administration used it to produce medical equipment and supplies during the early stages of the coronavirus pandemic. Biden evoked its authority last month to prioritize boosting the nation's supplies of baby formula amid a domestic shortage caused by the safety-related closure of the country’s largest formula factory.

The government is banning companies from importing or making plastic bags and Styrofoam takeout containers by the end of this year.
Jun 20th, 2022
Follow Us
Most Recent