The family has insisted on a legal shield in exchange for providing the money behind the settlement. 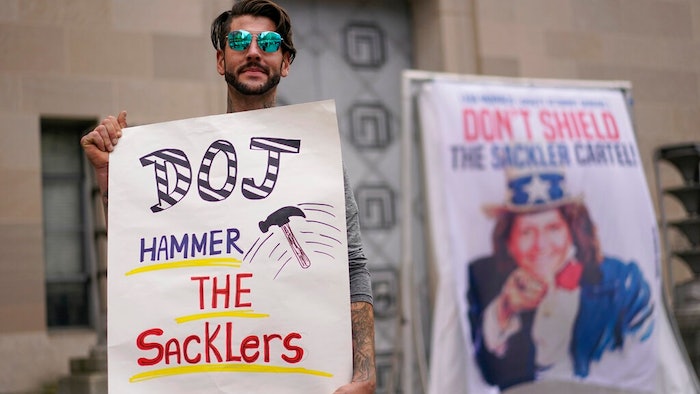 Nicholas Rivers of Maine, holds a sign that reads DOJ Hammer the Sacklers" during a protest with advocates for opioid victims outside the Department of Justice, Friday, Dec. 3, 2021, in Washington. A federal appeals panel is scheduled to hear arguments on whether members of the Sackler family can be granted protection from lawsuits as part of a bankruptcy settlement for the company they own, OxyContin maker Purdue Pharma. If the company doesn’t get what it wants, it could have to fight off thousands of individual lawsuits.
AP Photo/Carolyn Kaster, File

A settlement that would allow Purdue Pharma to exit bankruptcy and require its owners to contribute billions of dollars to help combat the opioid crisis in the U.S. hinges on a legal question before a federal appellate panel on Friday.

Lawyers for the company, state and local governments, individual opioid victims and others who would receive payments under the deal will make their case before the 2nd Circuit U.S. Court of Appeals in New York City.

At issue is whether a bankruptcy court judge has the authority to grant members of the Sackler family who own the OxyContin maker protection from civil lawsuits over the toll of opioids. Family members have insisted on the legal shield in exchange for providing the money behind the settlement.

Under the deal, they would contribute $5.5 billion to $6 billion over time, plus give up ownership of the company. Purdue would then become a new entity known as Knoa Pharma that would dedicate its profits to fighting the nation's opioid epidemic.

Most of the Sacklers' money also would go to fighting the epidemic, but at least $750 million would be distributed to some individual victims and their families.

Other product-liability cases have been settled through bankruptcy court by using the sort of protections this deal would give the Sacklers. But opponents of the settlement are challenging the strategy based on the fact that a handful of parties still object to the deal.

Almost all the governments and other entities that originally sued Purdue have agreed to the settlement. That has left only a small group of objectors: Canadian local governments and First Nations; two mothers of sons who died of opioid overdoses; and the Office of the U.S. Bankruptcy Trustee, an arm of the federal Department of Justice.

A judge called for mediation between Purdue and the two individual plaintiffs to see if they could agree on a settlement.

This week, more than 1,000 families who have lost loved ones to overdoses sent a letter asking the U.S. Justice Department to drop its opposition. They said individual victims would not receive payments if the settlement is derailed.

“Moreover, if this plan is not implemented, the states would have to wait years to recover money to be used for abating the opioid crisis,” their letter said. “With drug overdoses occurring at record rates, that is time we cannot afford.”

The federal judge overseeing Purdue's bankruptcy case approved a settlement last year that was later rejected on an appeal brought primarily by attorneys general for eight states and the District of Columbia. The sides then went to mediation that ultimately persuaded the Sacklers to increase their contribution by more than $1 billion.

Purdue is perhaps the highest-profile player in the opioid industry. But several other drugmakers, distribution companies and pharmacies also have been sued by state and local governments. While a handful of cases have gone to trial, many also are being settled.

Earlier this year, drugmaker Johnson & Johnson and distribution giants AmerisourceBergen, Cardinal Health and McKesson finalized deals to provide a total of $26 billion. Most of the money is required to be used to fight the opioid crisis, which has been linked to more than 500,000 deaths in the U.S. over the last two decades.

No matter how the 2nd Circuit rules on the case, an appeal to the U.S. Supreme Court is possible. If Purdue and its allies win, they still must go back to the bankruptcy judge to get the latest version of the deal approved.