He hinted the incentives targeted a company associated with the electric vehicle industry. 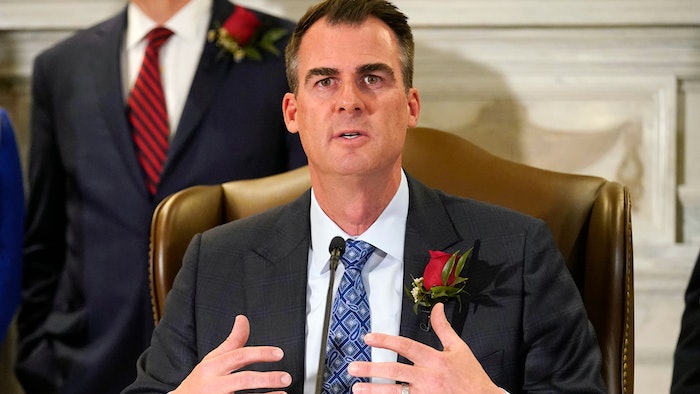 Oklahoma Gov. Kevin Stitt speaks at a signing ceremony to sign into law a bill, Tuesday, April 12, 2022, in Oklahoma City. The governor is asking lawmakers to approve a massive package of financial incentives to help lure an unnamed company to the state. Stitt made the request at a news conference on Monday, April 18. He told reporters he was prohibited from naming the company or the total cost of the package.
AP Photo/Sue Ogrocki, File

OKLAHOMA CITY (AP) — Oklahoma Gov. Kevin Stitt on Monday asked state lawmakers to approve a massive package of financial incentives, including tapping into the state's reserve funds, to help lure an unnamed company to the state.

The first-term Republican said he was prohibited by a non-disclosure agreement from naming the company or outlining the total cost of the package. But he hinted that the incentives targeted a company associated with the electric vehicle industry.

“Tens of billions of dollars are going to be invested over the next five to seven years in this space, and we want Oklahoma to be the spot that these folks land," Stitt said.

He said the unnamed company planned to build one of the largest manufacturing facilities in the country, a “humongous factory with billions and billions of dollars worth of investment, thousands and thousands of jobs."

Japanese broadcaster NHK, citing unnamed sources, reported last month that Panasonic Corp. was looking at both Kansas and Texas as a potential location for a factory to produce electric vehicle batteries for Tesla and other vehicle makers. Kansas earlier this year authorized more than $1 billion in state incentives in hopes of attracting a $4 billion project.

Panasonic did not immediately respond to a message left Monday seeking comment.

A bill unveiled Monday afternoon in a joint budget committee authorized rebates of up to nearly $700 million in state funds that could be disbursed to a company that reached specific benchmarks, including at least a $4.5 billion capital expenditure and the creation of up to 4,000 new jobs within the first four years of the project.

Oklahoma reportedly was in the running for the new Tesla assembly plant near Tulsa, and its CEO Elon Musk visited the city, but the company ultimately selected Austin, Texas. After the competition to land the Texas plant, Oklahoma launched a new effort to lure the automotive industry to the state.

Stitt wants lawmakers to expand the state's Quality Jobs Act, which provides quarterly cash payments up to 5% of new payrolls for up to 10 years for qualifying companies, to payments of up to 7.5% for major projects.

Stitt also wants to raise the cap on a separate investment tax-credit package, which provides tax credits to manufacturers based on either investment in property or the addition of employees, from 2% to 3%.

Speaker of the House Charles McCall and Senate President Pro Tempore Greg Treat both indicated their support of Stitt's proposal.

House Democratic Leader Rep. Emily Virgin said her members had been briefed by Stitt's Secretary of Commerce Scott Mueller on the general components of the plan, but was hesitant to offer her support without more information.

“The governor has not spoken to us about the bill, and it's very concerning he would ask us to support something without giving us the bill number or language," said Virgin, D-Norman.