The U.S. Army Corps of Engineers dumped toxic waste on the island for years. 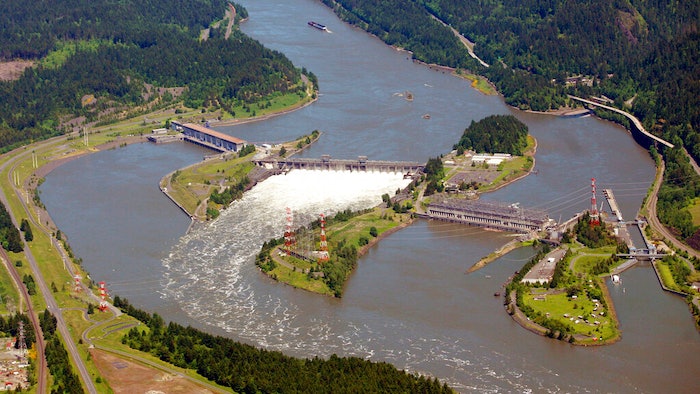 This June 3, 2011 photo, shows Bonneville Dam near Cascade Locks, Ore. The U.S. Environmental Protection Agency on Thursday, March 17, 2022, added Bradford Island, which is next to the dam, and surrounding waters of the Columbia River to its Superfund list of toxic waste sites. The U.S. Army Corps of Engineers for years dumped toxic waste on the island.
AP Photo/Rick Bowmer, File

SPOKANE, Wash. (AP) — The U.S. Environmental Protection Agency on Thursday added Bradford Island and surrounding waters of the Columbia River to its Superfund list of toxic waste sites, beginning the process for the eventual cleanup of the area.

The U.S. Army Corps of Engineers, which operates nearby Bonneville Dam, for years dumped toxic waste on the island, located 40 miles (63 kilometers) east of Portland, Oregon, and into a portion of the river. That waste contaminated fish caught and eaten by humans.

The uninhabited Bradford Island is part of the federal Bonneville Dam complex on the Columbia River, which divides Washington and Oregon.

“This is a day filled with hope for communities along the Columbia River,” EPA Administrator Michael Regan said in announcing the decision.

U.S. Sen. Jeff Merkley, D-Ore., said the site has been contaminated for decades by cancer-causing PCBs.

“Music to my ears,” Merkley said of the EPA's decision to begin what is expected to be a lengthy process towards cleanup. “Lets get it done.”

U.S. Rep. Earl Blumenauer, D-Ore., said he had been working on securing a cleanup decision for more than two decades and worried the work would take just as long.

“After 26 years it's clear we cannot afford to relax,” he said.

Gerald Lewis, a tribal councilman for the Yakama Nation, said the tribe's traditional way of life had been degraded by the pollution in the fish that is an important part of their diet.

“Our goal is clean, healthy, fish that is safe to eat,” he said.

“This is a huge victory for people that rely on a clean Columbia,” said Lauren Goldberg, legal director for the Columbia Riverkeeper environmental group. “With a Superfund listing, we can finally tackle the pollution problem."

The U.S. Army Corps of Engineers used the island as a landfill for 40 years and disposed of electrical equipment in the Columbia River, resulting in contamination from toxic polychlorinated biphenyls, or PCBs.

The Yakama Nation and the states of Oregon and Washington in recent years called on EPA to take over the stalled-out cleanup.

The agency's decision to add Bradford Island to the Superfund list, reserved for the nation’s most contaminated sites, will lead to additional funding and reduce threats to public health and the environment, Goldberg said.

Bradford Island and surrounding waters are fishing areas for multiple Native American tribes, despite advisories warning people not to eat fish found in that part of the river such as bass and sturgeon.

Fish caught near the island contain the highest levels of PCBs in the U.S. Northwest, officials said.

The Oregon Health Authority and Washington Department of Health issued fish advisories warning people not to eat fish caught near Bradford Island, but that did not stop people from catching and consuming the fish.