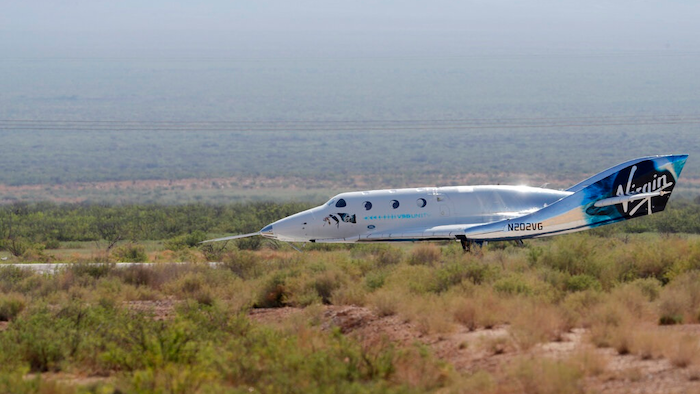 In this July 11, 2021, file photo the Virgin Galactic rocket plane, with founder Richard Branson and other crew members on board, lands back in Spaceport America near Truth or Consequences, N.M. New Mexico lawmakers are considering taxing tickets purchased by Virgin Galactic passengers. A bipartisan bill introduced in the state Legislature seeks to close a loophole that excluded spaceflight passenger tickets from gross receipts taxes.
AP Photo/Andres Leighton, File

LAS CRUCES, N.M. (AP) — Pity the poor space flight passenger: Flying up up and away from Earth could get even more expensive as New Mexico lawmakers consider taxing the tickets on Virgin Galactic.

A bipartisan bill introduced in the state Legislature seeks to close a loophole that excluded spaceflight passenger tickets from gross receipts taxes. The move aims to harvest revenue from ticket sales as Virgin Galactic prepares for regular commercial service from Spaceport America in southern New Mexico.

Virgin Galactic told investors last fall it had about 700 reservations for flights. With a ticket price of $450,000, the tax would be at least $31,000, the Las Cruces Sun-News reported.

Virgin Galactic said it was aware of the proposed legislation and would continue working with the state “on policies that support our combined goal of growing aerospace in New Mexico.”

New Mexico taxpayers have invested millions for the construction and operation of the spaceport, for which the state has been promised returns in the form of high-paying aerospace jobs, related economic development and tourism.

The legislation would amend a statute that excludes receipts “from launching, operating or recovering space vehicles or payloads in New Mexico” from gross receipts taxes. It would clarify that sales “for transporting any person into or near space” would be taxable.

A 2019 ruling by the state Taxation and Revenue Department on the question of taxing flights to space essentially treated passengers as freight, stating that it seemed reasonable to consider passenger revenues as receipts received for the operation of a space vehicle.

“When those exemptions were drafted, it was not in anyone’s mind that people would be a payload,” said Republican Rep. Jason Harper of Rio Rancho, who is co-sponsoring the bill.

“I can’t think of a particularly good reason why we wouldn’t tax this activity,” McQueen said.