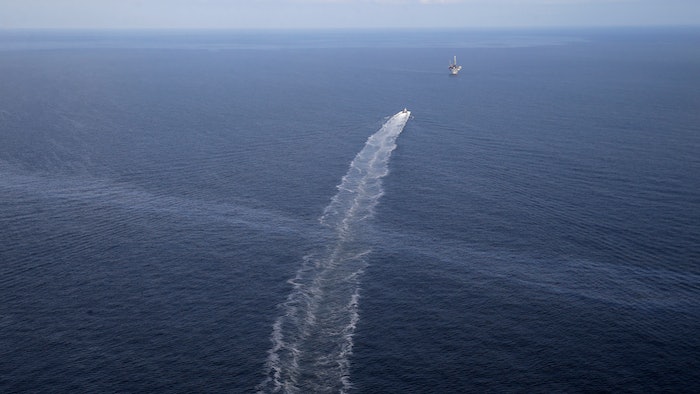 Federal prosecutors say a New Orleans-based company has agreed to turn over a $432 million trust fund and pay $43 million to settle a lawsuit over cleaning up the nation's longest-running oil spill.
AP Photo/Gerald Herbert, File

NEW ORLEANS (AP) — A New Orleans-based oil company has agreed to turn over a $432 million cleanup trust fund and pay an additional $43 million to settle a federal lawsuit over cleaning up abandoned wells leaking since 2004, federal prosecutors said Wednesday.

“This settlement represents an important down payment to address impacts from the longest-running oil spill in U.S. history,” Nicole LeBoeuf, director of the National Oceanic and Atmospheric Agency’s National Ocean Service, said in a news release from the U.S. Department of Justice.

Attorneys for Taylor Oil Co., which agreed to drop three lawsuits challenging government cleanup orders and measures, did not immediately respond to an email requesting comment. As is common in such agreements, the proposed settlement said Taylor does not admit any liability.

Sixteen wells off Louisiana have been leaking since September 2004, when a subsea mudslide caused by Hurricane Ivan knocked over a Taylor production platform, dragging and breaking a cluster of pipes. Taylor plugged nine wells but has said it cannot plug the rest.

The settlement requires Taylor to drop its other lawsuits. In June, a federal appeals court agreed that a district judge was right to throw out a trespass suit against a federal contractor that created a system to capture most of the oil.

That system has captured and removed more than 800,000 gallons (3 million liters) of oil since April 2019, Coast Guard Capt. Will Watson, sector commander in New Orleans, said in the news release.

“Despite being a catalyst for beneficial environmental technological innovation, the damage to our ecosystem caused by this 17-year-old oil spill is unacceptable,” said Duane A. Evans, U.S. attorney for the Eastern District of Louisiana.

Taylor’s website states that it sold all its oil and gas assets in 2008 and exists now only to respond to the toppled platform. The company has agreed to turn over all remaining assets after liquidation, the government said.

The trust fund was created to plug the wells, permanently decommission the facility and clean contaminated soil. One of Taylor's suits, filed in 2016, sought to get back the remaining money, claiming regulators had broken the agreement requiring it to put $666 million into the fund.

The company also had appealed the Coast Guard's rejection of its claim for $353 million in cleanup costs.

The trust fund will be transferred to the Department of the Interior under the settlement. The additional $43 million — all of the company's remaining assets — is for civil penalties, removal costs and natural resource damages, the news release said.

It includes a civil penalty of $15 million, $16.5 million for natural resources damage and more than $12 million for Coast Guard removal costs.

The company cannot interfere with the Bureau of Safety and Environmental Enforcement’s decommissioning work or the Coast Guard's oil containment and removal, and will turn over all studies, reports and other documents about the site.