The new rules will reduce NOx emissions by around eight tons per day. 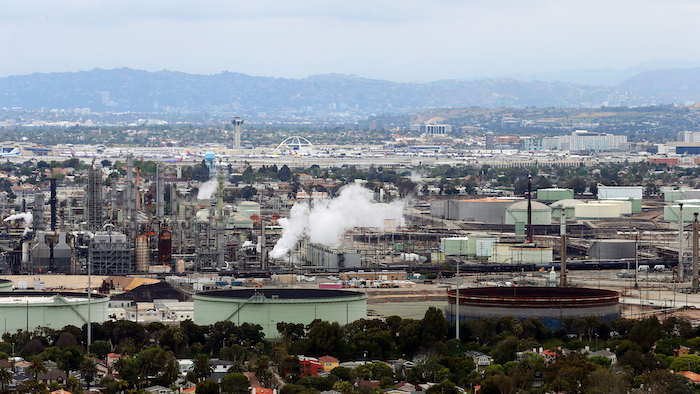 This aerial photo shows the Standard Oil Refinery in El Segundo, Calif., with Los Angeles International Airport in the background and the El Porto neighborhood of Manhattan Beach, Calif., in the foreground, May 25, 2017.
AP Photo/Reed Saxon, File

DIAMOND BAR, Calif. (AP) — Southern California air regulators on Friday approved new restrictions on area oil refineries and other factories that could remove tons of smog-forming pollutants from the air.

Oxides of nitrogen, collectively known as NOx, form when fuel is burned at high temperatures. The gases can be produced by cars and industrial sources such as refineries and power plants. They are a key ingredient in producing ozone pollution.

The new rules will reduce NOx emissions by around eight tons per day over the next 14 years, with nearly half of the reductions expected by 2023 and will go a long way to helping the region meet some federal air quality standards by 2031, the AQMD said.

“Once implemented, this rule will have immediate benefits to our air quality, especially for those living near these facilities who are directly impacted,” AQMD board Chair Ben J. Benoit said in the statement. “We estimate the public health benefits achieved through this rule will help avoid 370 premature deaths and more than 6,200 asthma attacks.”

The rules apply to some 300 pieces of combustion equipment at the facilities such as boilers and gas turbines. The rules, which will be implemented over a decade, provide two ways of meeting the new requirements and also ban refineries from purchasing credits to offset pollution they produce.

The total cost of implementing the new rules is projected at about $2.3 billion but the reduction in health costs from pollution is expected to be about $2.6 billion, according to a September AQMD study session.

“The industry is committed to ensuring the rule is successful by making substantial investments to reduce emissions,” Patty Senecal, director for the association’s Southern California region, told the Daily Breeze.

The vote also was applauded by environmental groups.

“These reductions are crucially important; Southern California suffers from some of the dirtiest air in the nation and fails to meet state and national air quality standards," said a statement from the Coalition for Clean Air.

The coalition said most of the state's oil refinery capacity is located in and around the Los Angeles harbor neighborhood of Wilmington, nearby Carson and western Long Beach in areas with large low-income and minority populations.